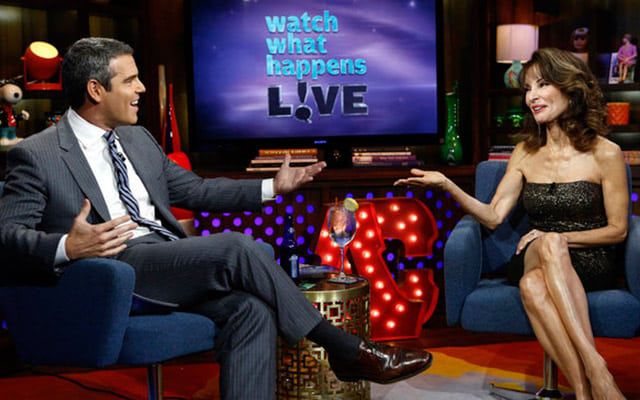 If you tuned into the new OWN/Tyler Perry series, “If Loving You Is Wrong,” during its premiere Tuesday night, then you’re all too aware that the steamy drama series is nearly too hot to handle! Scandalous sex scenes, drugs, affairs, love, families and friendship are just the tip of the iceberg when it comes to the topics offered on the show, which ended up being the most-watched series premiere in OWN’s history! Since former “All My Children” star Aiden Turner (ex-Aidan Devane) is smack dab in the middle of the excitement as the stuffy-yet-lovable character Brad, Soap Opera Network met with him to get the lowdown on working with creator/writer/director Tyler Perry, his embarrassing first meeting with Oprah Winfrey and what lies ahead for Brad on the sizzling series!

Anyone who knew Turner as “AMC’s” private detective Aidan may have been a little shocked to see him as the buttoned-up husband/father/businessman Brad on “If Loving You Is Wrong” — the slightly nerdy character is a far cry from his super smooth daytime alter ego! “Aidan was so cool, you know? And Brad is kind of a dork!” the Hertfordshire, England native says with a laugh. “I mean, he was fun to play, but with the wardrobe that he wears, he’s wearing pinks and bright colors, and he’s very spiffy. So I just kind of thought I’d pretend I’m in England going to a polo event with horses and stuff like that.”

However, with Brad finding out that his wife, Alex (Amanda Clayton), has been having an affair with his friend/next door neighbor, Randall (Eltony Williams), he’s a ticking time bomb on the way to a very messy explosion! “Brad is a stong man, he does the right thing, never reacts or gets too angry. So it’s nice to see him sort of crack over time,” the actor says of what’s to come. “He’s got the nice façade that we all put on every day when we go out into the world, and he’s very, very stable. But once he finds out about his wife and what she’s doing behind his back, he just crumbles. And to watch that is, I think, really, really interesting and fascinating and heartbreaking — both to watch and to play. It’s so emotional.”

Which is, again, a far cry from “AMC’s” Aidan, who Turner recalls cried a mere one time: “He was always tough, but when Greenlee [Rebecca Budig] flat lined, he cried. Just once. He never really cried, expect for that one time.”

So how has he tapped into the intense emotions required to play Brad? By delving deep into moments from his own painful past. “Heartbreaking stuff, like losing my grandmother in real life, going back there, and how sorry I was, because I was really close to my mum’s mum, and just a breakup, a recent breakup that was hard. And just reading emails and sad texts.”

The method worked for the scenes, but unfortunately, it carried over into his after-work life, as well! “Some days, I’d come home from work, and I remember someone in the building that I lived in in Atlanta, it was a worker coming to drop off something, and he saw me, and I was still crying, because I was so upset, and he said, ‘Are you ok? Are you ok?’” Turner recalls. “And I was like, ‘Yeah, I’m fine! I mean, I know I don’t look fine, but I am fine!’ So yes, it was an emotional journey.”

Luckily, the actor says that OWN, Oprah Winfrey and Tyler Perry create a safe, welcoming environment for intense character exploration. “I really like working really closely with Tyler; he directs every single episode, and he’s written every episode, so just to be on set with him has been amazing,” he says. “In one of the scenes, I think it’s in episode 12, I find out some pretty horrible information, and we literally sat down with the cameras really close while they were getting the close ups, and sometimes he even talks to you while you’re right there and while you’re in the scene and he helps you get there, to be emotional. He says, ‘Don’t worry about it. You’ll get used to the way I work, I’ll just take my voice out in post,’ and he’s right there with you.

“At first, it was a bit difficult, because we as actors start the scene and then we finish at the end, and no one interrupts,” he continues. “But after the first week, I got used to it. He has your back, and it’s not about knowing your lines. It’s about creating a real character. It’s just been an amazing learning experience and an amazing opportunity.”

Meeting Oprah for the first time was also an amazing experience for the actor, albeit a slightly awkward one! “The first time I saw her, I was putting on my trousers,” he explains with a laugh. “Tyler knocked on the door of my dressing room and came in with her, and I was like, ‘Oh! This is an awkward moment. So sorry!’ And she said, ‘No, no, no, I’ve seen it all before.’ So I quickly put my shirt on and shook her hand. She looked around the dressing room and said, ‘Ah, this is nice. These are some nice digs you’ve got here. It’s bigger than my dressing room that I use every day on this movie that I’m shooting in Atlanta!’ So she was so cool, down to earth, and it was really great to meet her. She’s a great woman.”

And the same can be said for her network, which Turner explains is rather different from ABC, which broadcast “AMC” while he was on it. “ABC as a network is absolutely amazing [but since Disney bought it], it’s just very corporate and there wasn’t any freedom as far as to explore your character,” he explains. “Even though Disney was really, really great to me, I always felt like it was kind of like a Catholic private school. It was very strict. You felt that if you got out of line, you were going to be in trouble. But working for OWN, especially under Tyler, just to have the freedom, and not being so corporate, just because they work closely together, and they’re good friends, and it’s a new network, and they’re really trying to make it grow, that they, I don’t know, it just seems so friendly and so loving and so easy. Everybody is sort of under a microscope over at ABC, whereas here, they’re like, ‘Welcome! Have a drink!’ It’s nice. It makes a difference, and I think you can see it in the work.”

Though Turner looks back on his soap opera days with fondness, he admits that working on a primetime show is much more comfortable for him as an actor. “There’s so much information that needs to come across as an actor on a soap, and it feels like… we’re all just puppets trying to get the words out,” he says. “And as much as I loved working on ‘All My Children,’ it was almost like you’d have one tape, and we were done and you had to move on. So it wasn’t about the quality, it was about [getting the words out]. So it was so nice to get to work in this form, in real houses, and you’re outdoors, and we didn’t have to talk about what happened in the last episode. The drama is there, but it’s real life. Artistically, I was a little bit more comfortable. It was nice to be able to explore and to have an arc and to get the scripts ahead of time, whereas with soaps you get them three days before, so you always feel like you’re rushing. So it’s very different.”

Speaking of “AMC,” Turner shares that a very special former co-star was there when he found out he’d been cast on “If Loving You Is Wrong;” Darnell Williams (ex-Jesse Hubbard)! “He invited me out to his place out near Palm Springs, and I told him that I had the audition, and I told him that I had been to Tyler’s house for the callback, and he said, ‘Well how was that, man? That’s cool!’ And so we sat down to drink a glass of wine, and I said, ‘I think I’m going to find out tomorrow,’” he recalls. “So, I stayed over in his spare room, and we had breakfast, and we were chatting, and I got the call from my agent saying, ‘You got the job!’ So Darnell cracked open a bottle of champagne, and I stayed for longer. It was great.”

Little did he know, he’d soon be working closely with another familiar face: “Days of our Lives’” Joel Rush, who plays Brad’s chauvinistic best friend, Edward. “He’s just as crazy in real life,” Turner jokes. “Brad has to deal with him, and Aiden has to deal with Joel, so it’s such a great dynamic between us two, and we’ve become great friends.”

And he’s also become quite close with Amanda Clayton, who plays his onscreen wife, Alex. “We rehearse and really try to go through all of the tons of lines that we’ve had, and we got to know each other really well and have become great, great friends,” he shares. “The characters are very intimate, so it was good that we loved each other like that, because it comes across on the screen. And really, just everybody, our dressing rooms are really close to each other, and we all help each other out with our lines, because we’re shooting so quickly, and we all want the best for the show. And sometimes we’d meet on the weekend and have a group dinner somewhere. It’s just been really great.”

Catch Turner on OWN’s “If Loving You Is Wrong” Tuesday nights at 9/8 C.