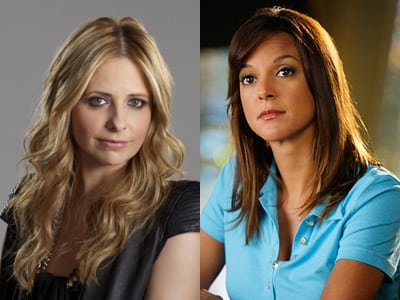 Eva LaRue and Sarah Michelle Gellar reunited with some of their former co-stars on the set of “All My Children” earlier today. The two beautiful women taped their scenes scheduled to air on Wednesday, September 21. Continue to read to find out who Gellar will be playing. Soap Opera Network also investigated to find out if this episode is it for LaRue.

With scripts reportedly being manipulated due to “AMC” receiving a new lease on life on the internet, it appears to be impacting more than one return to the program. As we reported earlier this week, Julia Barr’s return was cut short. LaRue’s spokesperson tells Soap Opera Network that her appearance with Gellar will indeed be her next and final appearance on the soap on ABC. The actress who last appeared on the soap in July for two episodes was originally slated to air in three more episodes before “AMC” ended its run on ABC on Friday, September 23.

On her official Twitter feed, LaRue describes the scenes with Gellar that she affectionately refers to as cheesy. Paying homage to Gellar’s run on “Buffy the Vampire Slayer” and possibly to “AMC’s” current bizarre umbrella story that has several character returning from certain death thanks to a miracle drug regime, Sarah will be playing Dr. Maria Santos psychiatric patient. Dr. Santos’ patient insists she’s surrounded by … vampires!