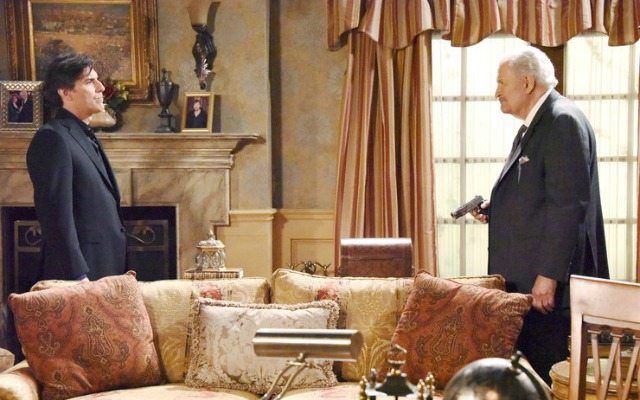 (SoapOperaNetwork.com) — A look at what’s happening on “One Life to Live” during the week of August 8, 2011.

Starr confesses to James that Baz kissed her. On Wednesday, August 10, Starr shows James just how much she loves him. Rex searches in vain to prove his visions of Gigi were real. Echo voices her concerns to Natalie, who summons Madame Delphina on Thursday, August 11. After making contact with an unknown spirit, Delphina provides a cryptic clue, which puzzles Rex and Natalie. Rex fears he will never find closure. Elsewhere in Llanview, Rama informs Cristian that she and Vimal are back together and tells him she’s sorry for leading him on. At the same time, Vimal tells Brody that Todd also knows his secret. Clint sentencing gets underway, and the judge considers his request. And Viki steps up for Clint on Friday, August 12.

The Inside Story: It’s All in the Genes
Todd’s loved ones react to the results of the DNA test on Monday, August 8. However, the Manning’s are soon delivered even more shocking news. With everyone still reeling, Dani comes face-to-face with the man with her father’s old face. One of the Todd’s requests a second DNA test. Todd is shocked when Viki suggests a new living arrangement for the man with the scar on Tuesday, August 9. Jack stands by Todd, while Blair and Starr have their doubts. Todd and Téa recall old times as do Viki and the man with her brother’s old face. Todd and Téa share a warm moment. Blair is hesitant about being with Tomas, who promises to get to the bottom of things. By Thursday, August 10, the two Todds await the new test results. Jessica has a heart-to-heart with the old Todd. Trying to prove who he really is, Todd works hard to convince Blair to believe him. Todd kisses Blair. The Todd’s have an encounter at Llanfair. Tomas seeks John’s help. Later, he joins John and Brody as they set out to unravel the mystery. The trio make a surprising discovery on Friday, August 12. David offers both Todd’s some food for thought. And Téa consoles Dani.

A Closer Look: Got Baby?
Nate confides in Dani on Monday, August 8. Nora is upset Bo didn’t arrest Nate, and later confronts him herself. Nora makes a tough call. Meanwhile, Destiny makes the difficult decision regarding her unborn baby. After receiving some advice from Vivian, she goes to talk things over with her (grand)mother. Reconciling, Phylicia agrees to honor Destiny’s decision. David visits his little brother. Later, Nora overhears Destiny telling Matthew what she decided to do about the baby. On Wednesday, August 10, Nora begs Destiny to reconsider and offers her an alternative. David is surprised to learn that Nate is still walking around free and runs off after Destiny. Bo learns he’s going to be a grandfather. Bo reassures David. By Friday, August 12, Phylicia thanks Vivian for her support. Destiny changes her mind about the baby. And Phylicia and Nora have it out.