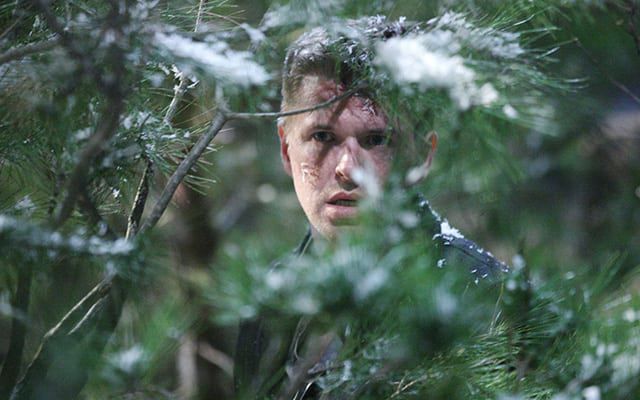 The moment “Days of our Lives” fans have been waiting for is finally happening: Molly Burnett is returning as Melanie Jonas today, November 21! But what exactly brings Melanie back to the canvas? And how long does Burnett plan on sticking around in Salem? Soap Opera Network spoke with the actress to find out!

“It feels like coming home!” Burnett exclaims of rejoining the soap opera on which she starred from 2008 to 2012. “They left the door open [when I left], which was great, and I just wanted to come back for a little bit and do some acting and be with the people I grew up with.”

But don’t be alarmed by that “little bit” part: The actress has signed a contract, so Melanie will definitely be sticking around for a considerable amount of time. Which is a good thing, considering both the character and her portrayer have grown up a bit in the two years since they’ve been away from Salem. “I made Melanie pretty similar to myself. I don’t do as many crazy things as she does, but the way she looks at life, she cares about everything, and she kind of wears her heart on her sleeve a little bit and she’s impulsive and she’s a goofball, and she runs into stuff, and she’ll die for any of her family or loved ones, and that’s kind of how I am, so the more I grew, the more she grows a little bit,” she explains. “[However], I don’t necessarily think it’s been too much of a switch. There hasn’t been much of a big change, just… I was gone for two years, and so was Melanie, so it’s the same feeling of, ‘You’re back in town. Is everything the same a little bit, or is it different?’ And so you kind of portray that onscreen a little bit, too.”

As fans might recall, Melanie left the canvas and headed to Europe to visit her mom and brother. But, as Burnett teases, the trip hasn’t gone so well! “She got herself into a dangerous situation, kind of as per usual. Europe is not a good place for Melanie!” the actress declares with a laugh. “She does bad things over there and then comes back, and her dad and Brady [Eric Martsolf] and Nicole [Arianne Zucker] have to help her out.”

A lot has changed in the town since 2012, and both Melanie and Burnett will have to get used to the differences. “I was talking to Eric Martsolf, and I was like, ‘Ok, I need you to go through and show me who some of these people are,’ because Chad [now played by Billy Flynn, previously played by Casey Deidrick] does not look at all the same!” she says. “So yeah, some new faces, but the same family feeling. I think I started when I was 19, and I spent my college years, in theory, here. So this is my first family in LA and it’s everybody that I just love to death.”

“For the most part though, it’s my usual crew,” she continues. “I get to work with Nicole a lot. And I love Ari Zucker. I always wanted Melanie and Nicole to [be in scenes together] because they’re kind of soul sisters. They get each other, because they make terrible decisions that at the time, they think is a good idea, but it never is. She’s great, and very comedic. But Brady and Daniel [Shawn Christian] and Maggie (Suzanne Rogers], the usual crew… Oh and Theresa, Jen Lilley. I love our stuff. She’s become such a good friend of mine. People know what Theresa has done to Brady, and obviously Melanie is not going to be ok with that, so there’s a kind of a Stephanie/Melanie, Chelsea/Melanie [dynamic] which has been really fun. She’s great. She’s a little spitfire. We say terrible things to each other and then they say ‘cut’ and we laugh and joke around and then jump back into saying these terrible things to each other. It’s been fun.”

Another new face she’s been sharing scenes with is Guy Wilson (Will Horton), though she explains that his face wasn’t exactly new to her. “Guy was a friend of mine before this, actually,” she says. “He’s a huge football fan, and so am I, and we met through some mutual friends ,and we’ve always joked around about football and watched games. So I’ve known him for a long time.”

READ ALSO: ‘DAYS’ Shawn Christian on Melanie’s Return: Daniel Has To ‘Harness a Reckless Child’ Who’s ‘Trouble In Both Barrels!’

And speaking of a long time, Burnett says it feels so good to finally be able to acknowledge her return on social media sites — something she hasn’t been able to do since she began filming at the beginning of the summer! “It’s been hard, because I like to interact with fans on Twitter, and it’s hard to just ignore them, but it’s what you have to do. You have to ignore them,” she explains. “I would have a lot of fun taking pictures behind the scenes and tweeting them or instagraming them so people could kind of get a glimpse into stuff, so it’s been hard not saying anything.”

Now that she’s back, she admits that though she’s enjoyed the freedom she’s had over the past two years to pursue outside projects and to travel [she went to Europe, just like Melanie!], she knew that “DAYS” is where she belonged. “This is your family. So even though you’re going to go do other things for a while, this is still who you kind of grew up with, and so it took awhile to get used to not seeing all these people all the time,” she explains. “I would still hang out with Shawn and Eric and Freddie [Smith, Sonny Kiriakis], but it was weird to leave.”