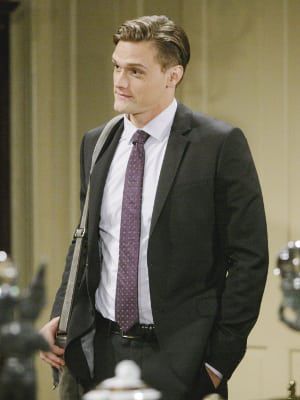 After announcing less than two weeks ago on his podcast with wife Alyssa Tabit (“The Freddie & Alyssa Show”) that he would have told “Days of our Lives” producers “no” if they reached out in regards to him reprising the role as Sonny Kiriakis on the soap, comes word of congratulations from Freddie Smith to his character’s successor Zach Tinker (Fenmore Baldwin, “The Young and the Restless”) who will take over the role as part of Peacock’s limited series spinoff, “Days of our Lives: Beyond Salem.”

“I want to give a shout out to Zach Tinker,” said Smith in an Instagram story posted yesterday shortly after news of Tinker’s casting first came to light. “Congratulations, man. I know you are taking over the role of Sonny Kiriakis. You are going to have an absolute blast. He’s an awesome character and it’s such an important storyline. I know you’re going to crush it so have fun and I can’t wait to check it out on Peacock.”

“Days of our Lives: Beyond Salem” doesn’t have an official launch date but last week the @PeacockTVCare Twitter handle inadvertently revealed that the show will premiere on Monday, September 6 on the streaming service.

In addition to Tinker’s casting as Sonny, Chandler Massey and Greg Rikaart are reprising their roles as Will Horton and Leo Stark, respectively, on the five-episode series. They’ll be joined by a host of other “DAYS” vets.

Watch Smith’s message to Tinker below.