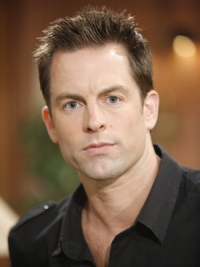 Jack startles a frantic Diane. She lied and said she had to take care of a phone call but closed the door to tell Kyle to keep quiet about his going to Switzerland. A worried Kyle wanted to know who was after her. Jack soon enters and asks Kyle if he wanted to do something together. Meanwhile, Phyllis and Nick were trying to find out for sure if Adam was sitting on the proof to clear Sharon. As they talked, Sam entered the magazine and wanted to know if it was true that Adam was deliberately hiding information.

At the jail, Sharon gushed at Adam holding her engagement ring in his hand. He told her that Noah gave it back to him when he received all her personal belongings. He wanted to know if she will marry him. When she doesn't say anything, Adam wants to know what's going on. She tells him about the deal that D.A. Walsh made. Adam tells her to call Walsh and take the deal but she refuses to do it. He tries to warn her about what it is like in the state pen. He tells her again to take the deal but do it as his bride.

Neil and Katherine meet up together for a meeting. She commented on how Sofia was still butting in on decisions she made regarding the aquisition. Sofia soon arrives and wants to know why she's being so diificult. When Katherine gets a phone call, Sofia bad mouths her to Neil. Neil tells her to cool her jets. Katherine returns and apologizes to her but Sofia continues to cool toward her.

Kyle tells Jack that he can't go with him, that he is going to his friends. An unknowing Jack tells his son to have fun. Before Jack leaves, he gives Diane a warning not to play games with him when it comes to Kyle. Diane snips for him to leave. When he does, she tries to contain her cool.

Tucker and Ashley are talking about the son he knows nothing about. He soon starts to put himself down about his character and the fact that he was with many women during that time. Tucker tells Ashley that the note he received was from an unknown woman telling him that he was a father. Ashley assures him that she loves him no matter what. He shares about about his rock star lifestyle. Tucker talks on the irony of how Katherine was never in his life, and now he's in the same position with being out of his son's life. Tucker is still upset about not knowing about his son when Sofia huffs in to complain about Katherine. Katherine, however, is having her own meeting with Jack. She is proud of the progress he's made with the new product. Jack fills her in on how odd Tucker's behavior was at the launch party. He thinks that something could be going on. Tucker, on the other hand, tells Sofia the truth about his condition and asks her if she's still by his side to give support. Sofia tells him that she is.

After coming up empty in finding the memory card at Adam's suite, Phyllis and Nick return back to the magazine. The two feel the sexual tension and immediately go at it on the desk. As Phyllis and Nick do what they do best, Sharon broke Sam's heart by telling him that she's marrying Adam. She tells him that he should go back home. Disappointed, Sam walks out and Adam gloats a bit at his expense.

At the airport, Diane spends time with Kyle before he is to head to Switzerland. She gives him a bracelet to remember her by. A teary eyed Diane kisses her son good-bye. She leaves the airport and heads to Restless Style where she gets an eyeful of Nick and Phyllis having sex.

While Sam sits at Crimson Lights, he calls to tell Piper that he is coming back home. At the jail, Adam comes in with a chaplain and they are set to get the wedding underway. Sharon shares her vows with Adam and says 'I do.' When it comes time for Adam to say his vows, he stalls. Sharon is stunned when Adam says "Do I? Actually no, I don't. How the hell could I be married to you?"