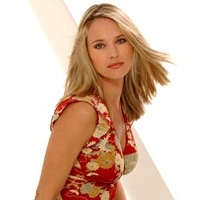 Phyllis was working at Restless Style when Jack showed up. He was curious to know what she was doing back at the magazine and she told him that Nick hired him back. Jack congratulated her and she did the same for him in getting his CEO position with Jabot. Jack rubbed her the wrong way however, when he made a comment on how Nick and she would wind up back together. Phyllis said that was never going to happen.

The visits kept on coming when Noah arrived at the magazine. He wanted to introduce Phyllis to his friend, Hunter and was curious if there were internships available. He shared doing the scattering of Sharon's ashes. They briefly talked when Hunter came in. The girl was instantly impressed with Phyllis and Phyllis said she would talk to Nick about a possible internship.

Ashley, doing a favor for Nick, watched Faith while he went to go retrieve her baby blanket. When he got to the bridge, he saw Adam there, and the two once again got into it over Sharon. Nick said that if Sharon had been alive still, she would have eventually dumped him; Adam on the other hand said Nick was just jealous because she chose him over Nick. Adam said that Nick was ruining her memory while he was trying to help salvage her reputation. Disgusted, Nick walked off. Meanwhile, Jack, arriving at Crimson Lights, voiced concern over Ashley's renewed focus of baby Faith.

At the dance, several people commented on how familiar Sharon looked to them. She told each person that she just had a familiar kind of face. Sharon began to worry however, when Brenda, the waitress who had served her when she arrived in New Mexico pointed out the carjacker as the one who took her car. Sharon's eyes locked with the carjacker's and Sam picked up on it. he urged her to tell him what was going on, but Sharon continued to brush it off. Doing so, Sam asked Sharon to dance with him.

Nick headed back to the office and was determined to get their story out about Adam. While he and Phyllis were talking about what to add, the two began flirting with one another. When things started to get close between the two of them, Phyllis and Nick both agreed that it was the wrong thing to do.

Jack learned from Ashley that Tucker wanted her to run the company; including Jabot. Jack beame upset and told her that he wasn't letting her or anyone near Jabot again; he worked to hard to get it back.

At his suite, Adam and Emmet were going through the memory card when the got a clear audio of Sharon and Skye talking. The audio proved that Sharon wasn't trying to kill Skye. Adam thanked Emmet and gave him the bonus he promised him. He sat down and looked at a picture of Sharon, saying he wished he found the proof for her before time had ran out. Back at the dance, as Sharon and Sam danced, the carjacker pointed out to both Lee and Marco that Sharon was the woman he carjacked. During the musical montage, Jack, Noah and Adam all thought on Sharon, while Nick and Phyllis decided to think about heating things up with one another. Once the band ended their song, Marco and Lee both approached Sam and Sharon. They told Sharon that she was arrested. Sam looked on stunned, while Sharon looked on in fear.