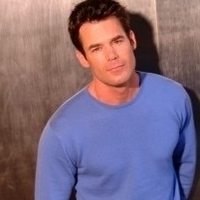 (SoapOperaNetwork.com) — Here today, gone tomorrow.  Tuc Watkins latest stint in Llanview as David Vickers Buchanan has proven to be like all his others…faster than a New York minute. On Monday, April 11, just as David and his lady love Mayor Dorian Lord (Robin Strasser) settle into married life, they are faced with a tough decision regarding their future together.

That’s right, after returning to “One Life to Live” on March 15, Watkins already has both feet out the studio door. However, as fans have come to expect with the actor, a rep for the show reminds us that he is bound to return sooner or later for yet another brief stint. In the meantime, however, look for the newlyweds to discuss whether or not they can handle a long distance relationship with David supervising production of his biopic on the West Coast, while Dorian remains in Llanview to tend to her mayoral duties.

Watkins originated the role of David in 1994 and has played the character on and off first leaving the show in 1996. He has also appeared on “General Hospital,” “Beggars & Choosers,” and “Desperate Housewives.”