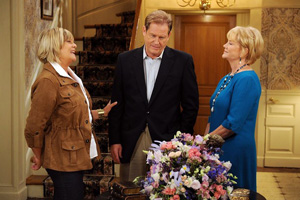 (SoapOperaNetwork.com) — By now you’ve probably heard that “Guiding Light” alum Kim Zimmer is returning to “One Life to Live” on Friday, October 1, to reprise the role Echo DiSavoy. But what will this mean for the residents of Llanview? Soap Opera Network has your exclusive sneak peek at what is bringing the minor 1980s character back to town.

It all begins when Echo turns up on Viki’s doorstep at Llanfair. It turns out that, since leaving town in 1983, she and Viki’s (Erika Slezak) current husband Charlie (Brian Kerwin) crossed paths on more than one occasion. As the two old flames catch up on recent events, Viki remains suspicious of Echo’s sudden reappearance in Llanview after nearly thirty years (which makes sense, since the last time she was in town she tried to frame Viki’s then husband Clint [Jerry verDorn] for murder). 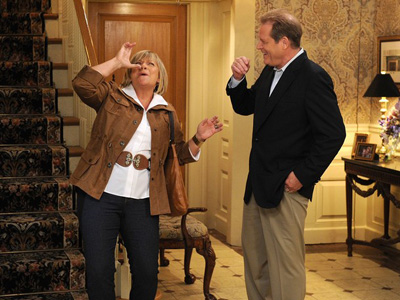 But wait, there’s more…despite telling Charlie she has no ulterior motives for returning to town, Viki succeeds in getting her to admit otherwise. What’s worse, it seem’s Echo is now claiming to be a fashion photographer and makes interesting proposition to Viki, in hopes she will hire her at the The Banner. But will Viki be persuaded by what she has to say?

Afterward, Viki voices her concerns to Rex (John-Paul Lavoisier) and Natalie (Melissa Archer), while Echo goes to visit another one of her old friends — Dorian Lord (Robin Strasser).  Problem is, however, that Dorian doesn’t give her quite the reception she was hoping for when Viki’s name comes up during their conversation.  Furthermore, Echo is carrying around some major secrets concerning some of the residents of Llanview.

And that’s only the beginning…

“One Life to Live” air Weekdays on ABC. Anytime on ABC.com.