Sabine Singh fans will be happy to learn that she will be making another appearance on “OLTL” as Wendy the Happy Hooker on Wednesday, August 6th, when she is called upon by David. Look for the two “friends with benefits” to go out on a double-date with Dorian and her faux beau Clint.

It appears that Janet Hubert‘s latest stint as Lisa Williamson will come to an end the week of July 26th, when she agrees with Layla to take Evangeline off of life support.

Erika Slezak and Brian Kerwin bring Viki and Charlie back to Llanview on Wednesday, August 11th.

Llanview newcomer Max Tapper commented on his Facebook page on July 15th that “For all my ‘One Life to Live’ fans, Det Price has more in store. it’s gonna get fun!” He has also posted a pic. of himself in his dressing room at “One Life” getting ready to tape a steam room scene on July 19th. You can see the picture here.

Terrell Tilford announced Monday on his Twitter page Monday (July 26th) that he would have an “Announcement: a few days away…” Could he be on his way out of Llanview soon? In the meantime, get ready for more Greg Evans. Tilford tweeted Thursday (July 22nd) that “4 scenes down…11 scenes to go… Whew! Just got in, exhausted, but rejuvenated! 21 scenes tomorrow…I’ve got to study my lines, omg! We shall do this!” Then on Friday he commented that “One hour from now, scene 1 of, well! 21… This is gonna be fun! just got home… today was a terrible day of shooting for me.. simply exhausted. but i give myself an hour to beat myself up, then i’m done.” Tilford also taped scenes on July 19th; his next airdate is August 5th. Hmmm…could these scenes possibly involve Téa’s condition taking a turn for the worse? Only time will tell.

David A. Gregory (Ford) commented on his Facebook page that he is “working every day this week!” on “One Life to Live.”

ABC Soaps in Depth states that a setside source tells them that viewers may not have seen the last of Kelly Cramer’s former London beau Reed Wagner (Gavin Alexander Hammon).

Michael J. Burg has been cast as the “Conseiller Municipal,” who is rumored to be performing a marriage ceremony for someone. Burg’s airdates include August 27th and 30th. Burg appeared in a handful of episodes on “OLTL” in 2005, as a “Mystery Person/Killing Club Killer.”

According to listings at IMDb.com, upcoming airdates for Billy Warlock (as a recast Ross Rayburn) include Friday and Monday, August 27th and 30th. It is speculated that Ross’ return to the canvas and the “Conseiller Municipal” character, who is rumored to marry Blair and Eli, are connected.

The site also lists Nic Robuck (James) as appearing in the August 23rd episode, as well as Mary Ryan as the Director of the August 27th episode.

“One Life to Live” Music Director Paul S. Glass tweets that the song during the Todd/Téa montage in the July 22nd episode was an ABC original number entitled “Talks Like the Streets,” and that it’s “not available but should be on itunes in a couple of weeks.”

“OLTL” recently released a new audition script for the role of a “Tahiti Cop,” which will coincide with the upcoming return of Ross Rayburn. The scene begins with “Brad” introducing himself to the cop as “Lt. Brad Daley, Llanview P.D.” The cop replies yeah, from Pennsylvania, and that he spoke to the police commissioner from there earlier on the phone. Brad states that he coming to arrest a fugitive by the name of “Clark Brown.” The cop points to a nearby man, claiming he’s Mr. Brown. However, Brad replies that that is not the person he is looking for. The cop asks who is he then, to which Brad quips that the man is actually “Ray Patterson.” The cop admits that he only did what he was told. He was informed that he could find Clark Brown at this address, and that the man identified himself as such. Annoyed, Brad asks the cop if he or his fellow officers encounted anyone else at the scene, like maybe a skinny blonde woman. The Tahiti Cop replies that they did a search of the area, but it turned up empty. Interested, Brad asks where the search area is, to which the cop replies that it is nearby. Brad says that he must get there right away. Ray, meanwhile, inquires as to if he is a free man now. The cop says, no, because he is wanted by in the U.S. Ray is adamant and replies that it’s Clark, and not him, that they want, and that they have the wrong guy in custody. The cop replies “now you tell us” as the scene ends.

Another new audition script is for the role of Judge Burdett. In this script, the Judge asks “Tim Bright” if his attorney will be joining them in the courtroom today, leading him to admit that he couldn’t afford to hire one. The Judge replies that it shouldn’t be a problem, since the case appears fairly simple and straightforward. He/She goes on to say that the will appears to be in order, since it has been signed and notarized, and rules that Tim is should be granted custody of “Suzy Marsh.” “Patrick” jumps up and states that “Sam Major” is Suzy’s biological father, and not Mr. Bright, giving him the advantage according to the laws of the Commonwealth of Pennsylvania. The Judge agrees that there is precedent, and that he/she will hear arguments to that effect. The Judge then asks Tim to proceed, at which point he admits that he has something that should settle the matter….Suzy’s birth certificate naming him as the girl’s father. (The Judge’s last name in this script is the same as that of a woman Executive Producer Frank Valentini encountered while on a recent trip to Costa Rica, in which he promised to name an upcoming minor character after her).

There was also two other scripts released recently for the minor roles of “Mr. Stein” and a “Coach,” however, details on them remain sketchy at this time.

Kassie DePaiva tweets that “For those of you looking for photos of my new hair…Buy the June 22 issue date of Soap Opera Weekly for photos. Should be on sale now.”

And Lenny Platt (Nate) tweeted earlier this month that “For reals. Over in a flash. Too bad they didn’t keep the scene of Starr changing shoes mid-shootout.” The scene he is referring to was the shoot-out in the barn with Todd, Bull, Nate, Starr, James, and Dani. 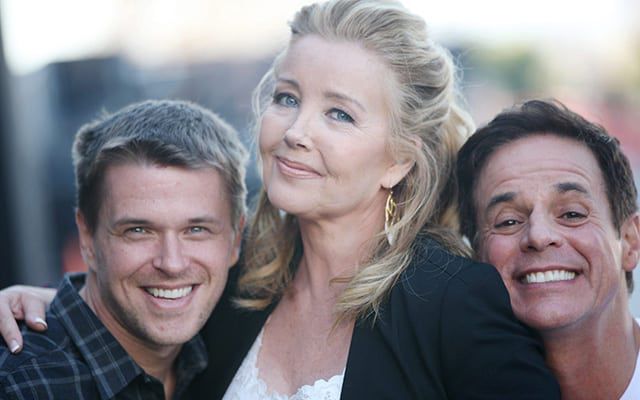 On Monday, February 3, CBS' "The Young and the Restless" welcomes actor David Tom back into the role of Billy Abbott. The actor, who last appeared on the soap as teenaged version of the character in August 2002, replaces Billy Miller, who opted to depart the series in order to pursue other projects.

Not Coming Back: Alexa Havins

Josh Duhamel Return in Works at ‘All My Children?’