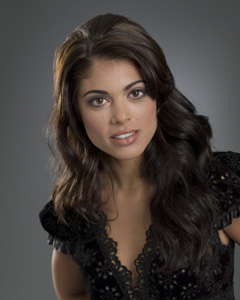 (SoapOperaNetwork.com) — Can chemistry strike twice for Lindsay Hartley (ex-Theresa Lopez-Fitzgerald, “Passions”) and Eric Martsolf (ex-Ethan Crane, “Passions”)? “Days of our Lives” seems to think so as the soap has hired Hartley to replace Felisha Terrell in the contract role of Arianna Hernandez, Brady Black’s (Martsolf) love interest on the soap.

No word on what caused the soap to make the drastic change, but it is clear that the show is looking to recapture the magic of the “Passions” supercouple portrayed by Hartley and Martsolf for six years (Martsolf joined the cast as Ethan in 2002).

Terrell joined the “DAYS” cast earlier this year, but got her break in the 2008 film “Get Smart” starring “The Office’s” Steve Carell.” She also appeared in an episode of HBO’s “Entourage.”