The leading ladies of “The Young and the Restless” continue reminiscing about their favorite wedding moments, this time with their character’s first time down the aisle and the dress they each wore. The trip down memory lane by the former brides all leads up to the wedding of Victoria Newman (Amelia Heinle) to Ashland Locke (Richard Burgi), which officially kicks off today, Thursday, October 14.

In the “Dishing on the Dress” segment, Melody Thomas Scott (Nikki Newman) reveals she had no input on the wedding dress she wore the first time her character married Victor Newman (Eric Braeden). “The show had hired a very fancy designer duo and they had very definite ideas about what they wanted. I had several fittings for it, and by the time it was all complete it weighed over 30 pounds,” says Scott. “Now people don’t realize how heavy something like that could be. That was okay when we started in the morning but as the day went on, it got heavier and heavier, and heavier. The designers were mortified because they were following me around making sure that I wasn’t getting the train dirty on the floor,” she added, noting, “they were fussing over me like a mother hen and after eight [or] nine hours shooting that I was literally… I shouldn’t admit this, but I was so exhausted and the dress was so heavy. I was lying on the floor of the stage because I just needed five minutes to not carry it around. They [designers] were apoplectic.”

Referencing her character’s wedding to Danny Romalati (Michael Damian), Laurelee Bell (Christine Blair Williams) said her dress was perfect because “it was very much off the shoulder and I think that was probably just to give me some ventilation in the beautiful heat of Hawaii. I was very young and it was very youthful.”

For Christel Khalil (Lily Winters), she recalled Lily’s wedding to Cane Ashby (Daniel Goddard), saying the dress was custom made by the show’s wardrobe department, “which was really cool just to kind of see the process of, you know, getting fitted and the silhouettes and the drawings, and then it actually coming to fruition. So, yeah, the wardrobe department worked really hard just to make a really beautiful, unique, custom dress.”

As Sharon Case (Sharon Newman Rosales) has experienced several different weddings over the years for her character, most recently to Rey Rosales (Jordi Vilasuso), she recalls Sharon’s wedding to Nick Newman, Joshua Morrow. One that actually led to marriage and the other that fell off the rails.

“The first wedding dress that Sharon wore with Nick was a princess wedding dress with a big skirt and a train, and puffy sleeves,” Case says of the 1996 nuptials. “At Nick and Sharon’s most recent wedding, which didn’t happen, that dress was designed and built by the ‘Y&R’ costume department, and so was Sharon and Nick’s wedding’s first dress, the one with the big skirt. The wardrobe department designed and built that dress, too!”

“I remember that I had a lot of input into Lauren’s wedding dress to Michael [Baldwin, Christian Le Blanc], and the one thing that I forgot to do during any of the fittings was to see if I could sit down. I could not sit,” Tracey E. Bregman (Lauren Fenmore Baldwin) says with a laugh. “It literally took three people to get me in that dress. It looks like, ‘Oh, just slip it on, zip it up. No! It was three people holding onto everything and two people trying to zip [it up], and I was like, ‘Oh, my god.’”

Although Mishael Morgan has yet to experience an on air wedding playing Amanda Sinclair, she previously experienced two weddings to Devon Hamilton (Bryton James) during her time portraying Amanda’s twin sister, Hilary Curtis.

“I remember the first wedding dress that I had when I was nine months pregnant [in real life], they actually made it for me because they had no idea how big I would be and they wanted to be able to maneuver it, and then at the last minute kind of pull it in so the whole thing was made by the wardrobe department here at ‘Y&R’ and they put all the flowers and everything on it, and they said, because they couldn’t show my belly, they put all of the design kind of like up by my neck and it was beautiful. I loved it, especially since it was made for me. So that was nice,” Morgan says of her character’s first trip down the aisle. She notes, “On my second wedding dress, I remembered being… it was hilarious because we all laughed about it because Hilary was in so much pain and she had all this internal bleeding. I was wearing this tight wedding dress and we were like, ‘How did Hilary actually get into this wedding dress. In real life, they would just throw something on her and pin it back but it was this tight wedding dress that I had to shimmy on and my belly was popping out. It was funny. It was a lot of fun though.”

“Chloe’s character is really all about fashion,” says portrayer Elizabeth Hendrickson of her character, Chloe Mitchell. “I also like fashion, so, whenever I was fitted for wedding dresses I always wanted it to be something that I could also imagine myself in,” she adds. “I actually remember my wedding dress with Billy [Abbott, then Billy Miller]. I just remember having this beautiful headpiece on and they did a custom-fitted dress. It maybe had a bustier fit in the front. It was all custom fit. It was really, really beautiful. I also, again, I don’t think that it was just white. I think that it was even a little silver.”

Hendrickson notes that the last wedding dress she wore, “When Chelsea [Melissa Claire Egan] goes after her, was actually a dress that I had actually had my eye on and it was something that thought that I’d wear if I were getting married. So, I always have a little fun with the process. Thankfully, the people at wardrobe is always down for it. I want to feel comfortable. I want to feel like Chloe, and I also, especially if I know that I’m going to be having a fight, I also have to be able to have my moves.”

Melissa Ordway (Abby Newman) had two weddings on “Y&R” thus far and she shares that both of them were beautiful, however, the one that stands out was the one Abby wore when she married Chance Chancellor [then played by real life husband, Justin Gaston]. “The great thing about Abby and Chance’s wedding dress is that our costume designer, David [Zyla], picked it out and it was the first dress that I tried on. It fit perfectly, it barely needed any alterations and it was so different,” says Ordway. “I felt like it really was the perfect dress for Abby because it was like sexy, but kind of flirty, and the color wasn’t really white because it was her second wedding. I just feel like it was the perfect dress for Abby to wear and that was actually my favorite wedding dress that I got to wear.”

Michelle Stafford (Phyllis Summers) couldn’t just name one dress as her favorite. She had to choose two. “My favorites are the one that I first wore for the Danny Romalati wedding, and then my second favorite was the one that I wore when Phyllis got arrested right after the wedding [to Nick]. That was… it was really just simple and beautiful.” As for where the dresses ended up, Stafford also wants to find out. “Where are they now? How come I don’t have them?” she asks.

You can also watch the “First Time Down the Aisle” segment below to find out what the actresses had to say about their first wedding bout on “Y&R.” 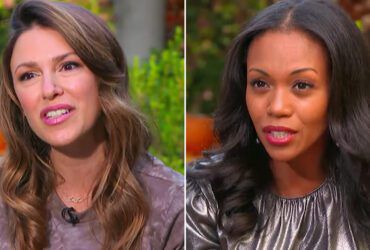