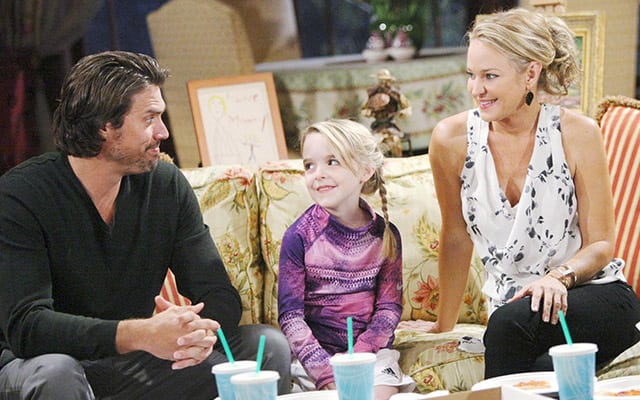 If you find yourself tuning into CBS’ “The Young and the Restless” later this month and think you’re seeing things when Faith Newman appears on your screen as someone you may have seen not too long ago, don’t be too surprised. Actress McKenna Grace is once again stepping into the role of Sharon (Sharon Case) and Nicholas Newman’s (Joshua Morrow) little girl following news of current portrayer, Aly Lind, booking a role in a pilot for TNT. Grace actually took over the role of Faith from Lind when she appeared from July 2013 to June 2014, when Lind returned.

In addition to her return to “Y&R,” Grace is set to appear in upcoming episodes of CBS’ “CSI: Crime Scene Investigation” and “CSI: Cyber.” She’ll also appear in an episode of Disney Channel’s upcoming “K.C. Undercover,” starring Zendaya (“Shake It Up!”). The actress originally departed the soap following her booking a series regular role in the ABC pilot, “Clementine,” which ultimately did not receive a series order by the network for the 2014-15 television season. Back in June, ABC Studios, the production behind the pilot, extended the cast options.

Grace is set to begin airing for some episodes beginning Thursday, December 25, per CBS Soaps In Depth, which first reported the news.