Sharing sex scenes with some of the hottest men in daytime must be a tough gig, but someone’s got to do it. And (un)lucky for the rest of us, “Days of our Lives’” Kate Mansi (Abigail Deveraux) is the actress who’s been called upon for the gig. First she got Chad (then played by Casey Deidrick, now played by Billy Flynn), then she got EJ (James Scott), and now she’s got Ben (Robert Scott Wilson). But where has this bad boy bonanza left her burgeoning alter ego? Soap Opera Network spoke with Mansi to find out!

The past few months have been a whirlwind for Abigail, and the story that had her between the sheets — and in the shower — with EJ not only left her in a tailspin, but Mansi in one, as well. Now, both she and the audience seem to be thinking, “Where does Abi go from here?” Because, after all, it’s pretty hard to top those intense scenes that had her alter ego sleeping with the show’s former leading man! “I think that was Abigail’s feeling, too — ‘You were with this guy who rocked your world’ — and you know, good or bad or indifferent, you can’t ignore how major it was in her life,” the actress explains. “That’s definitely a real thing, and I think it’s just shown me new levels of myself, because that story really challenged me. It’s taken my acting to a new level, and I really embrace the new talent and I just think I have a very ‘Let’s just go with it’ attitude and [have learned] to be present.”

Whether they loved it or hated it, viewers of the show were given quite an intimate look into Abi’s journey of becoming a woman and finding her sexual identity. “It was a real sexual awakening for Abigail,” the actress comments on the EJabi storyline. “She was, don’t forget, a virgin. When a woman is a virgin until she’s 20-something years old, and then you have somebody like Chad in your life and it’s real special, that’s sort of like the loving relationship, and it’s great, and then you have someone like EJ right after that… everything is at a new level. And I think she found her sexuality and she just went there. It unleashed a lot of stuff in her, and I think it’s great, because it ultimately made her become more comfortable and confident with herself. And it really was a coming of age story. I mean, she became a woman. When you’re a virgin for that long, and you still live with your family, and your family is a Deveraux/Horton family and you’re always the good girl, there’s a lot of guilt with feeling like you can’t be sexual, with feeling like that’s not who you are. And when you’re in your 20s or whatever, you don’t know who you are yet. So it was a chance for her to explore the new versions, and yeah, it was great.”

With a new sense of self, Abigail is verging into a new relationship with Ben — which the actress says she’s really enjoying. “I love working with Rob. It’s so great,” she enthuses. “He came on and really stepped into a character that we didn’t know a whole lot about, as someone who didn’t have a family or anything. And it was really fun. I just think that the way this story develops is really interesting. And it’s just going to keep getting deeper and deeper, so I think the fans are really going to like it.”

However, that’s not to say that Chad won’t be in the picture. In fact, he’ll be an integral part of her storyline in the coming months because, as she teases, one never forgets one’s first love. “There’s a real weight with Chad, because of the history,” she explains. “And I think Abi feels the way that he’s hurt her so deeply, that she’s cautiously optimistic in seeing what will happen. But she never stopped feeling all those feelings for him.” 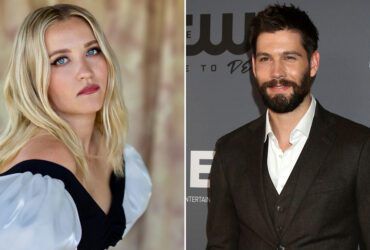