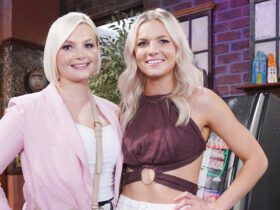 As previously reported, “The 41st Annual Daytime Emmy Awards” will air live exclusively on the internet for the first time on Sunday, June 22 from the Beverly Hilton Hotel in Beverly Hills, CA (via www.daytimeemmys.net). While you get yourself prepared to watch daytime’s biggest night online, The National Academy of Television Arts & Sciences (NATAS) has announced the presenter lineup for the telecast, which includes several of daytime’s biggest names from soap operas, talk shows and game shows, among many other genres airing during the daypart.

Overseeing this year’s event is Executive Producer Spike Jones, Jr., who expressed his excitement over this year’s talent and new categories. “It’s a double great evening,” said Jones. “I’m thrilled to be producing the Daytime Emmys with the hilarious Kathy Griffin hosting. Plus I get to see the debut of the Entertainment News category Award. Access Hollywood going up against Extra? Entertainment Tonight versus E! News – with TMZ thrown in as a wild card. It’s going to be epic.”

This is the first time in its history that NATAS will be utilizing streaming technology, provided by Livestream LLC, to broadcast the awards show, and it does so in the hopes that audiences around the world will be able to engage in an event which celebrates programs that are known internationally and boast a global fan base.

“The National Academy of Television Arts and Sciences is, this year for the first time, servicing the daytime television community within the context of a modern, multi-screen viewing environment. We are promoting the extraordinary product and talent available on daytime to the largest possible global audience, ensuring that everyone has access to the Daytime Emmys,” said Malachy G. Wienges, Chairman of The National Academy of Television Arts and Sciences. “Our industry cannot afford the nostalgia of a conventional TV-only broadcast. I trust that by next year, a progressive, forward thinking network will air the Daytime Emmys as a companion to our successful digital, social and mobile strategy.”

make sure to tune in online at www.daytimeemmys.net beginning at 8:00 PM EST/5:00 PM PST on Sunday, June 22, to find out who wins. The event will streamed live from the Beverly Hilton Hotel in Beverly Hills, CA.