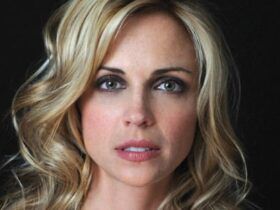 Just as Sabrina Santiago learns that she is pregnant on ABC’s “General Hospital,” her portrayer reveals she is also pregnant in real-life, reports People magazine. “It feels wonderful. This is the most joyous time of my life,” said actress Teresa Castillo to the publication, where she announced she was expecting her first child – a girl – with husband Shane Aaron. “It feels great to finally be able to share it with the world,” she added.

Wed in 2008, the couple are expecting their bundle of joy in May, while in reel-life Sabrina will be experiencing a headache full of drama in the coming months as she debates on how to inform Patrick (Jason Thompson), who just left her in order to return to the arms and bed of his recently revealed to be alive wife, Robin (Kimberly McCullough), about their surprise post-wedding gift. Castillo tells ABC Soaps In Depth, “I feel like it was appropriate for the story. It just adds to the drama, and I love it.”