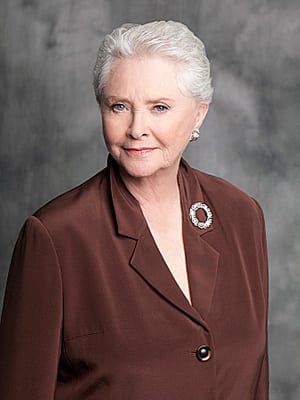 Just over a week before she airs for the final time after 25 years portraying Stephanie Forrester on “The Bold and the Beautiful,” CBS has released a video montage of  Susan Flannery as she got the ultimate send-off from cast and crew of the popular daytime soap opera with some help from other CBS Television City employees, including those from “The Young and the Restless,” “The Price is Right” and “The Late Late Show with Craig Ferguson.”

The video was filmed on October 18, Flannery’s last tape date at Stage 31 at the CBS Television City studio used by “B&B.” The video was produced by the soaps executive producer/head writer Bradley P. Bell and Casey Kasprzyk. Kasprzyk also directed the video. The song used is “Who Loves You” by The Four Seasons.