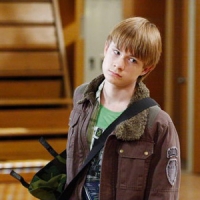 Shane bursts in on Clint and Viki, blasting him for living while his mother has died. Rex takes him out, after agreeing with his son. Rex explains to Shane his purpose in trading Gigi’s heart for Clint’s money – he wants to get even with Jack and Todd. They prepare to move out of the carriage house and into Asa’s mansion.

Meanwhile Jack balks at going to work for Todd, as he starts to feel geniune remorse over Gigi’s death. Blair confronts Todd about getting Jack off the hook and tells Jack he’ll never feel okay about this unless he admits the truth. Jack takes off in Todd’s car. Jack comes to talk to Shane, and they’re face to face.

Bo visits Clint and Clint assumes Bo is there about his arrest for the crimes he confessed to. The men make significant eye contact about how Clint stands by his confession of killing Eddie, and Viki realizes Clint is covering for someone. She guesses that it’s Matthew (after Bo is gone) and warns him not to waste his new chance at life by going to jail for a crime he didn’t commit.

Matthew struggles to tell Nora that it was Nate who hit him, but instead he has a seizure. The doctor tells Bo and Nora that there’s nothing he can do for him here. Nate tells Rick he may as well not bother blackmailing him and Deanna because Matthew is better and will eventually talk. Rick goes to the hospital and finds out that, in fact, Matthew is having a seizure and is not better. Dani comes upon Nate sharing this news with Deanna and hugging. They argue, leading to Nate blurting: why didn’t you tell me Matthew killed my father? Meanwhile Deanna runs into Rick and he tells her Matthew took a turn for the worst and she better do his porn film.

James shares with Deanna his dislike of Baz, as Baz and Starr make music together. Baz is surprisingly good with Hope. James returns to Deanna, bummed that Baz has a way with Hope and he doesn’t, among other things. Dani confronts Destiny about the pregnancy test in her purse. Destiny makes light of it but Dani makes her promise to call if she decides to take it. Destiny takes the test.