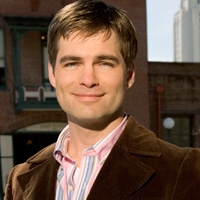 JR tells Scott he has more important things to worry about than dealing with Chandler Enterprise problems. Like salvaging his family. Scott can’t possibly understand what he’s going through because he doesn’t have a wife and kid. JR says he doesn’t care about anyone besides AJ but Scott points out that he had AJ until he started drinking. JR finds Tad and demands to see AJ. He tries to apologize to Krystal but winds up yelling at her and Marissa instead. AJ admits to Tad he doesn’t want to see JR.

Scott bumps into Madison at the park and he tells her about the work he’s doing on Stuart’s house and Madison says she would love to see his progress and Scott invites her to come over anytime.

Kendall, Greenlee and Madison prepare for the Fierce presentation. Since the breakup Kendall’s thrown herself into work while Greenlee urges her to give Griffin another chance since David is to blame for their breakup. Griffin shows up to ask Kendall to trust him but when he still can’t tell her what’s going on he apologizes for upsetting her and says he’ll leave her alone, hoping one day she will understand and forgive him. He tells David that he broke up with Kendall in order to keep the research confidential and wants to know what’s going on and how he can help. Greenlee comes into David’s room and tells him she doesn’t want him to die because she doesn’t want to die. She tells him that she hasn’t told Ryan he is treating her and won’t until she knows what David did to her and if she is going to die. David agrees to treat her but says he must take her somewhere for treatment.

Opal has convinced Jackson into believing Erica’s story and along with Tad and Jackson tries to figure out how he can get to Oak Haven to see Erica. Jackson shows up as her attorney and asks Erica to tell him everything right from the beginning. He says they need to find Ben and the plastic surgeon that did Jane’s work. Jackson tells Erica that he believes her and the two embrace, not sure when he’ll be able to visit again. Erica follows Janet to arts and crafts and finds Marian and Annie there. Marian tries to comfort Erica.