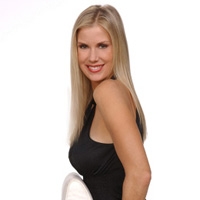 Thomas suggests he and Brooke go to Ridge and explain the kiss. Brooke is quick to say that it's probably already to late. "She's probably telling him as we speak, and blowing it out of proportion in the process.". Thomas says he hopes Taylor is blowing things out of proportion and going in one of her usual tirades. "My dad won't be able to take her seriously, just let her rant all she wants.". Thomas thinks they should go to Ridge and explain things to him more calmly and rationally when Taylor is finished. Brooke is worried that this will tarnish his and Ridges relationship. Thomas is confident that his father will understand.

Meanwhile, Ridge is in disbelief after Taylor tells him about the kiss. He wonders if maybe she misunderstood what was said. Taylor kept trying to explain that this wasn't a lie but Ridge wouldn't listen. "Taylor, I trust my wife. I have complete faith in her. She would never allow something like that to happen.". Taylor tells him once again that it's unfortunately true. Ridge asks how it happened. She explains that she thinks Brooke was sleep on the plane, most likely in one of her night lingerie clothes, and Thomas got overwhelmed and kissed her. Ridge begins to budge and Taylor tells him that she really thinks he should pull the plug on the Taboo line.

Thomas visits Steffy. He gets annoyed with her when she makes a joke about Dayzee. Steffy quickly notices that he's upset about something else and asks him whats wrong. Thomas tells Steffy that he kissed Brooke. Steffy is shocked. "Are you kidding me?!'. Thomas tells her that their mother knows and is freaking out about it. Steffy starts to freaks out as well and begins to blame everything on Brooke. She thinks Brooke has Thomas under a spell and is making him do these things. He assures her that's not the case. Thomas tells Steffy that he wishes she would just show him some support for once.

Taylor arrives at Stephanie's office and immediately tells her about the kiss. Stephanie doesn't believe it. Taylor says she knows what she heard and that Thomas even admitted it to her. She says the Taboo line is the main reason why all this has happened and that she thinks Ridge should get rid of it. Stephanie says there's no way Ridge would cancel the line considering how much money it's making. Taylor continues to have faith that he will. She then tries to get Stephanie to remember what kind of person Brooke is. "You need to stop and remember what it felt like when she got your husband to cheat on you with her. And then she just ditched him and left your family in shambles. Then she went after both your sons, I'm telling you she is going to go after your Grandson next, you've got to listen to me!". Stephanie takes those words to heart but still thinks there's more to this. She wonders if maybe this was a result of something Thomas had done. Taylor rebuffed by saying "Well, it's always so easy to blame the man, isn't it? It's always their fault that they find Brooke just so beautifully seductive.". Taylor then brings up something Stephanie told her before about how Brooke is always in control and knows exactly what she's doing, leaving men feeling like they've lost control and just let it happen.

Brooke goes to Ridges office and realizes that Taylor had gotten to him first. Ridge tells her that he knows about the kiss. He's mainly upset with the fact that she kept it a secret from him. She agrees but says that this wasn't important, not nearly as bas as how it seems. "My son kisses you and that's nothing?". Ridge is upset and says that it was a big mistake that she kept this from him. He regrets thinking that things had finally changed this time; that Brooke had finally learned from all her previous "Scandals". Brooke argued that Taylor was the one who glamorized the idea of her and Thomas and put it out there and made her out to be "forbidden fruit". But ultimately, Brooke sincerely apologized and asked for Ridge's forgiveness.