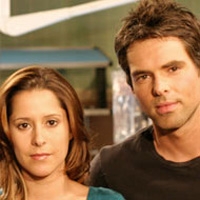 (SoapOperaNetwork.com) — "General Hospital's" Robin Scorpio (Kimberly McCullough) and Patrick Drake (Jason Thompson) are getting a new face for their baby girl. Not a face lift sillies (who'd do that to a baby anyway?), but a new actress is taking over the role of Emma from departing twins Jessie and Gianna Salvatierra.

According to ABC Soaps In Depth, Francesca Cistone will take on the role beginning with the Wednesday, March 23 episode. Cistone is the daughter of Danny Cistone, who recently appeared on the soap as Jules, one of Theo's (Daniel Benzali) men who taunted Sonny (Maurice Benard) on the Thursday, March 10 episode of the soap with a lead on Brenda's (Vanessa Marcil Giovinazzo) kidnapping.

According to In Depth:

No explanation has been given for the reason behind replacing the twins, who've been sharing the role since 2009, and setsiders report that Francesca — a fraternal twin herself –4 is just a few months older than Jessie and Gianna.