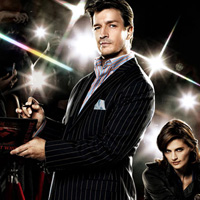 (SoapOperaNetwork.com) — You may have heard that Eden Riegel (Heather Stevens, "The Young and the Restless") and Victor Webster (ex-Nicholas Alamain, "Days of our Lives") would be appearing in the upcoming season of ABC's hit primetime drama series "Castle," but I bet you didn't know when that episode would air, did you? Soap Opera Network has the scoop!

In the episode entitled Punked airing on Monday, October 11, the shows fourth episode of the season, Riegel will be portraying the role of Rachel Goldstein, the distraught sister of a man killed by an antique pistol. "Castle" stars Nathan Fillion (ex-Joey Buchanan, "One Life to Live") and Stana Katic ("24") are called in to investigate the crime as title character and novelist Richard Castle (Fillion) and Detective Kate Beckett (Katic). Webster will also appear in this episode as Josh Davidson, Beckett's new boyfriend, who finds himself the center of attention when he drops by the police precinct to pick her up. According to ABC, "on seeing the big and sexy Davidson, the gang wonder: Who the hell is that guy?"