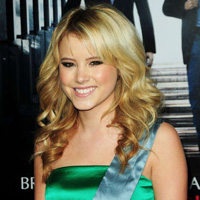 (SoapOperaNetwork.com) — Nearly two months after it was announced that Taylor Spreitler would be departing NBC's "Days of our Lives" in the role of Mia McCormick, a last airdate for the actress has been set.

According to sources, look for Spreitler to last air on Wednesday, June 23, when Mia shares an emotional goodbye with Sami (Alison Sweeney) and Will (Chandler Massey). The character is expected to head off to New York, as she recently discussed with ex-boyfriend Chad Peterson Woods (Casey Deidrick).

"My heart will always be in Salem. Wanted to say thank you to all my fans for your support. I would also like to say thank you to 'Days of our Lives' for letting Mia stay around in Salem longer than expected and for that I am grateful," said Spreitler in a statement released in April. "Looking forward to the next journey in my career."

Spreitler joined the cast of "DAYS" in January 2009 as Mia, who had given her baby to Nicole Walker (Arianne Zuker) to raise in Nicole's hopes of holding on to then husband E.J. DiMera (James Scott).