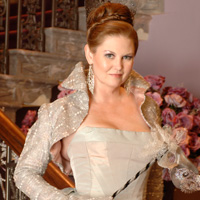 (SoapOperaNetwork.com) — Amanda’s mother returns with a vengeance on “All My Children.”

Janet Green returns to Pine Valley this April, in the form of popular actress Kate Collins. “All My Children’s” favorite sweet, albeit homicidal maniac continues to earn her nickname, Janet From Another Planet, when she breaks out of the psych ward determined to “manage” her daughter Amanda’s (Chrishell Stause) modeling career and personal life.

The talented Collins premiered in the role of Natalia Marlowe in 1985. In 1991, Collins began playing Natalie’s jealous twin sister, Janet. Collins left “AMC” in 1992 but has returned for extended stints in 2005 and 2007. Soap veteran Robin Mattson played the role of Janet from 1994 to 2000.

Look for Amanda’s online-stalker, Janet, to begin stirring up trouble in-person on Friday, April 30. Collins is back for a limited run.