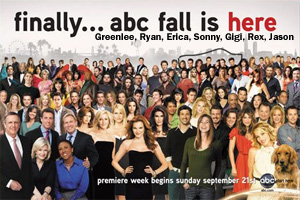 (SoapOperaNetwork.com) — In the 1980’s, ABC Daytime generated 3/4’s of the entire ABC networks revenue, making the lineup the most lucrative in all television. Since then ABC Daytime has become what fans call the “wicked step-child” of the ABC Television Network, a division of the Walt Disney Company. Now the network is showing some love to its most loyal and avid audience.

Consisting of popular talk-show “The View” with Barbara Walters and her crew of co-hosts, soap operas “All My Children,” “General Hospital” and “One Life to Live,” ABC Daytime is littered with fan complaints on how its executives do not care about the product they provide five-days a week.

With ratings continuing to fall, stars exiting to stage left onto other networks, and promotional campaigns bashing one actresses abilities by touting the “real”ness of another, ABC has shown that they are not interested in growing their lineup the nice way. The network keeps stale writing teams (think “General Hospital”), re-hires a specimen of said writing team to another show (Charles Pratt Jr. to “All My Children”) or takes an eternity to re-tell stories long forgotten (Mendorra or the beginnings of the Buchanan’s on “One Life to Live”). But hey, why not promote the shows good or bad? After all, even during their heydays, these shows weren’t without their problems either behind-the-scenes or in front of the camera. No show is perfect! 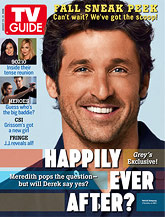 In the latest issue of TV Guide, ABC bought out all available ad spaces, a first for any company in the 55-year history of the weekly magazine. Advertisements not only included pages on the networks new and returning primetime shows, but there was enough room to tout morning news, daytime, evening news and latenight tv.

“We are delighted ABC has chosen TV Guide for this innovative and unprecedented partnership,” said Scott Crystal, president, TV Guide. “This collaboration with ABC is another example of our willingness to disrupt’ the norm in terms of advertising placement and execution with the goal of being both memorable and more engaging to our readers.”

Daytime was placed on the inside back cover of the issue.

In related news, earlier this month ABC began airing primetime promos for their September premieres. The network was also able to find space to combine said promos with those of morning news, daytime, evening news, and latenight tv as well. Is this a turning point for ABC where all of their shows get equal billing in promotions? Well, no.

We are in a time where a writers strike, a possible actors strike and a delayed primtime television slate has opened the doors for networks to think outside of the box and embrace change. Sooner or later we will be watching our favorite shows online as they air simultaneously on our bigger televisions screens. ABC is just furthering things along as we “Start Here” and end up watching their programming via our iPod’s, computers or on DVD.

This is Errol Lewis…Keeping you Wired.