Home / News / ‘Dancing with the’ Queen of Daytime 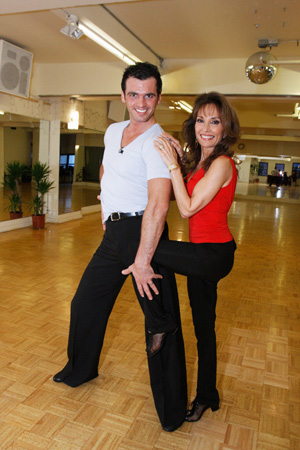 (SoapOperaNetwork.com) — Susan Lucci is due to find out the answer to that age old question: Is it more easy to win a snazzy disco ball trophy or a Daytime Emmy?

The internet web site Gossip Sauce announced the stars of the new season of ABC’s “Dancing with the Stars,” last week. On the morning of Monday, August 25, “Good Morning America” confirmed most of that list with the official announcement of the roster for the seventh season of the popular reality-competition series.

“All My Children’s” Susan Lucci, 61, will take on the torch of representing daytime television when the dance competition premieres this fall; she will be partnered with Tony Dovolani. After a rough start, “General Hospital” star Kelly Monaco was eventually crowned the champion on the inaugural season of “DWTS;” Lucci’s co-star Cameron Mathison finished the competition in fifth place in season five; former soap stars Lisa Rinna (NBC’s “Days of Our Lives”) and Mario Lopez (CBS’s “The Bold and the Beautiful”) also competed in the competition; Rinna finished in forth place in season two, while Lopez was runner-up to season three winner Emmitt Smith.

In the history of popular culture, it is likely that there will never come into existence an actor more synonymous with the medium of the daytime serial than “AMC’s” petite star. Thirty-eight years on the popular daytime serial, and a marriage or twelve for her alter ego Erica Kane, has contributed to Lucci’s fame, but it was eighteen Daytime Emmy nominations in the lead actress category, including an astounding streak of 14 consecutive nominations from 1980-1993, without a win that made her into a household name. Lucci’s streak made the Daytime Emmy’s must-see television through 1999, when Lucci finally took home the elusive award. During the losing streak, Lucci was invited to host NBC’s “Saturday Night Live,” an impressive feat for a daytime actor. Lucci has appeared on numerous made for television movies, as a commercial spokesperson for many products including Ford automobiles, starred on Broadway and is also a successful businesswoman/entrepreneur.

The rest of season seven’s competitors include:

The new season of “DWTS” premieres on Monday, September 22 on ABC.