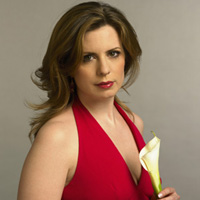 (SoapOperaNetwork.com) — After playing the role of Lily Snyder on CBS’ “As The World Turns” off-and-on for 23 years, actress Martha Byrne is now heading to Port Charles to play along-side John Bolger as the wife of Mayor Floyd (Bolger) reports SOAPnet.com.

Over the weekend buzz was growing that Byrne would be heading to “GH” in a then unknown role. SOAPnet spoke with Jason Thompson during the ABC Daytime/SOAPnet sponsored Stagecoach, and he shared his thoughts on the news.

“I’m really excited, there’s a lot of good stuff coming. I just heard that Martha Byrne is going to be joining the show, which is great. It’s always good to have someone shake things up — and especially when it’s someone who’s had such a distinguished career in daytime,” says Thompson.

Storyline details are being kept underwraps, but let’s hope that Byrne’s character won’t have to suffer at the hands of Sonny Corinthos (Maurice Benard) and his minions like so many characters who had potential had to.

Recently, Byrne has been playing her hand as a writer on CBS’  ”The Bold and the Beautiful.” She wrote the April 14 episode of the soap.

“I sent [head writer] Brad Bell some writing samples to get his feedback, and I got an e-mail saying he loved the material and wanted me to write a spec script for ‘B&B,'” said Byrne to Carolyn Hinsey in the April 10 Edition of the New York Daily News. “Based on that spec, I got a trial deal with the show.”

It is unclear at this time as to whether Byrne’s role on “GH” will conflict with any future possibilities she may have with “B&B,” but in any case, we’re glad to have the actress/writer back in daytime.

In 2008, Byrne left “ATWT” after a contract dispute with show producers. Noelle Beck took over the role of Lily Snyder in May 2008.

In addition to her work on “ATWT,” Byrne has appeared as a guest-star in such series as “Murder, She Wrote” and “Silk Stalkings.” She is also an Executive Producer for the short film “Bye Bye Sally,” which is set for release later this year.