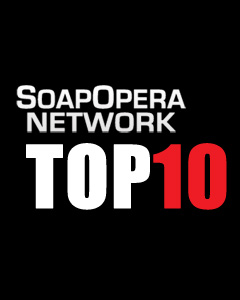 (SoapOperaNetwork.com) — Offline for nearly seven months, only two weeks of data posted, fanbases at war, board members angered. What the heck happened to my SON Top 10? Your questions answered.

Soap Opera Network‘s Top 10 Chart (SON Top 10 for short) was a poll created for fans of daytime’s best actors and actresses to vote on who they thought was the best performing talent during a given week. The poll included the best couples and the best soaps. Nearly two years after its demise, it was brought back for members of our SON Community and readers of soapoperanetwork.com. Unfortunately, certain fanbases stuffed the ballots to such an extent that counting votes made it universally impossible to accurately report the results without either disqualifying said fanbase from participation or hurting the integrity of the Soap Opera Network staff.

After being offline and seemingly banished from the website for nearly seven months, Soap Opera Network‘s staff has worked together on ways they think the polling system could be brought back without causing much harm or drama.

The SON Top 10 will return to the world wide web on Friday, July 17, 2009. Votes can be cast for actors and actresses who appeared on “All My Children,” “As The World Turns,” “The Bold and the Beautiful,” “Days of our Lives,” “General Hospital,” “Guiding Light,” “One Life to Live,” and “The Young and the Restless” during the week of July 13, 2009. An actor or actress must have appeared on the soap during the polling week in order to qualify for that week’s poll. Votes cast for actors or actresses not appearing during the given timeframe will not count.

In order to cast a vote for the SON Top 10, you MUST be a registered member of the SON Community. We will no longer be accepting votes from non-members. You will not be able to vote without being a registered member, so don’t waste your time. We will no longer be featuring the couples category (or the PC “duos”) in the SON Top 10. We will debut a new poll for couples in August.

If you have any questions or concerns about the new SON Top 10, please send your inquiries to [email protected]