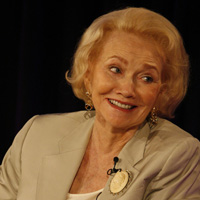 “One Life to Live” kicks off their 40th anniversary celebration by revisiting three classic storylines. Bo and Rex awaken to find themselves transported to the year 1968 after being struck by lightning. Struggling to make sense of the events unfolding around them, Rex and Bo work to understand what has happened to them.

The Inside Story: History Repeats Itself

In Mendorra, Carlo places his dastardly plan in motion. Tina is forced to watch in horror as Carlo sends Sarah sailing toward a deadly waterfall. Fortunately, Cristian is able to overtake the guards in an attempt to rescue Sarah. He manages to swim to her raft in time for he and Sarah to proclaim their love, before plunging to their doom. 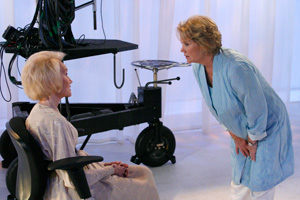 Upon dying in a car crash, Viki is transported to heaven by her Guardian Angel, an adult version of her stillborn granddaughter Megan. While in heaven, Viki is reunited with a number of familiar faces including Niki Smith, Asa, and her beloved Ben. Meanwhile, back on Earth, the late Mel Hayes pays Dorian a visit from beyond the grave. Mel belittles Dorian for what she did to Charlie, and warns her to quit living in Viki’s shadow. Back in heaven, Viki is greeted by God, who looks strangely like “OLTL” creator Agnes Nixon. Later, Viki shares an emotional reunion with Ben, who informs Viki that she still has life left to live, and urges her to give Charlie a second chance. Although heartbroken at the realization that she will have to leave Ben once more, Viki decides to return to her life. Meanwhile, Mel urges Dorian to save Viki’s life. At the same time, David wonders by and promises to divorce Addie if Dorian will save Viki. Dorian, meanwhile, is successful in her attempts to resuscitate Viki. After being taken to the hospital, Michael informs Dorian and David that it appears Viki will make a full recovery. Fearing he may go back on his word, Dorian forces David to sign annulment papers. Dorian wrestles with a guilty conscience, and later makes a confession to Viki. Afterward, the two long-time rivals form a truce.