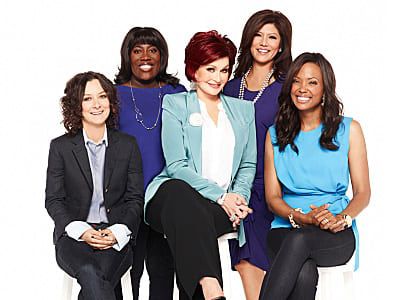 Things are really not looking too good at CBS’ “The Talk.” Following the departure of Carrie Ann Inaba earlier this month comes word that Elaine Welteroth will also be leaving the daytime chatfest after just one season.

According to Deadline, which first reported the news, Welteroth has decided to put her focus on “other projects.” Meanwhile, “The Talk” is now on the hunt for new permanent co-hosts to replace both Inaba and Welteroth. It’s understood that at least one new co-host, said to be a person of color, is hoped to be in place when the show returns for its 12th season premiering Monday, September 13.

In a statement given to Deadline, executive producers Heather Gray and Kristin Matthews said, “We wish Elaine all the best. We are grateful for her passion, enthusiasm, and insight she brought to the show daily.” They added, “Her openness and meaningful conversations were attributes we admired and always appreciated.”

In a full statement posted on her Instagram page, which was accompanied by a five-minute video montage of her time as a co-host on “The Talk,” Welteroth said, “If you told Oprah-obsessed, 9-year-old me that she’d one day get the golden opportunity to be on daytime TV, she never would’ve believed you. It is an absolute honor for anyone, but especially a young Black woman, to occupy this space on-air where our perspectives are largely underrepresented. And tbh, if you told 33-year-old me ALL it would take to show up as her authentic self in front of a live national audience every day in a world as divided as ours, she probably would’ve been shook lol.

“I’m so glad I didn’t shy away from this divine assignment to learn, to grow, to laugh, to cry, to make new friends, to learn a ton, and most importantly, to stay true to myself and what I stand for every single day—even when it was uncomfortable.

“I joined @thetalkcbs because I was excited to break out of my own echo chamber and join a diverse cast in helping to bridge some of the divides in our world through conversation and empathy. While that work will never stop, as I always say: when the music changes, so must your dance!

“I’m moving into a new chapter and won’t be back next season, but I will miss my talented co-hosts and crew and our daily #glamfam dance parties in the dressing room so much. Thank you all for riding with me through this journey. Stay tuned for some exciting updates ahead…”

Welteroth’s exit marks the fifth co-host change the veteran series has had in just one year. Prior to the launch of season 11 in 2020, Marie Osmond exited after just one season followed by the departure of Eve in December after just four seasons. The two were replaced by Amanda Kloots and Welteroth, respectively, starting in January. In March, it was announced that the show’s only remaining original co-host, Sharon Osbourne, would be leaving the series after a blowup on set during a March episode spiraled out of control over a conversation about racism. She was later replaced by Jerry O’Connell who officially signed on as the show’s first permanent male co-host in July.

In the ratings, “The Talk” has been cratering long before its relaunch earlier in the year with the introduction of a new set and new logo. In fact, the show had consistently hit record lows in Total Viewers long before Welteroth and Kloots made their debuts. Surprisingly, CBS handed the series a 12th season order with the hopes of turning things around.

In reporting Inaba’s exit from “The Talk,” Page Six revealed that the show is possibly looking to hire a second male co-host to replace her. It’s not known if the person of color mentioned by Deadline also meant they’d be male as well.

With Welteroth’s exit, and until a replacement is announced, the remaining panelists of “The Talk” now consists of just the aforementioned O’Connell, Kloots, and Sheryl Underwood who joined the table in season two.

Watch a clip of Welteroth’s time on “The Talk” below.