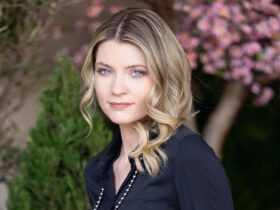 Elizabeth Leiner Departs ‘The Young and the Restless’

On Friday, May 21, “General Hospital” will air its long-awaited on-air tribute to the late John Reilly and his iconic character Sean Donely. Scheduled to take part in the special adventure-filled episode are “GH” mainstays Genie Francis, Kristina Wagner, Finola Hughes, Jon Lindstrom, John J. York, and even Reilly’s real-life daughter, Caitlin Reilly. Also appearing will be Kimberly McCullough who’ll reprise her role as Robin Scorpio for the first time since 2018. She’s not the secret surprise guest, however.

In late April, “GH” executive producer Frank Valentini teased the episode, saying, “With so many fan favorites returning, new and longtime viewers will enjoy it. We had a lot of fun filming and I am grateful that we were also able to include his daughter. Viewers will hopefully also enjoy one more surprise return – it is just too amazing to spoil.”

Many were left scratching their heads about who the surprise guest could be considering McCullough herself tweeted the possibility of her returning to “GH” just a few weeks prior to Valentini’s statements. In one tweet she said, “I did something really cool today that involved wearing make-up and heels all day, which I clearly wasn’t prepared for. Can anyone guess what this cool thing was?” In a follow-up tweet, she added, “Here’s a clue- saw some old friends and reminisced about an absent dear one…”

In response to her tweets, fans were quick to point out that McCullough must have been talking about “GH,” considering the timing. With Soap Opera Digest now confirming McCullough’s return as part of their cover story in its latest issue, on newsstands now, it appears the surprise guest will remain just that.

The show’s co-head writers spoke to Digest and outlined what fans can expect, without revealing the surprise. “I’m super-excited to see some of the people who we haven’t seen in a while come back to honor their friend,” said co-head writer Chris Van Etten. His sentiments were echoed by co-head writer Dan O’Connor, who said, “Once we figured out the timing of it, it just became a question of, what type of story do you tell to honor the character of Sean, and the actor, John? And we spent some time making sure that we found a story for the episode that would honor not only the character of Sean, but the type of stories that he was part of throughout his tenure on the show.”

Adding additional details, Van Etten said, “We wanted to try to evoke the tone that his stories had back in the height of his tenure, one; and we also wanted to make sure that our long-term viewers, who really remember the rascally Sean who really had a twinkle in his eye and that rough-hewn quality to his voice, we wanted to conjure up that spirit so that our viewers who have been with us long enough got a great blast from the past. But also, [we wanted] those viewers who may be newer and may not be totally familiar with the contribution that he made to the show to really get a sense of how his presence on the show built what the show is today.”

Annie Donely (formerly Anna) last appeared on the canvas in August 2013, played at the time by actress Courtney Halverson. In story, a poisoned Sean teamed up with Luke Spencer (Anthony Geary) to track down the man who extorted millions for a cure. Meanwhile, Annie repeatedly tried to make contact with the extortionist in order for him to give her the medicine her father so desperately needed.

While some are hoping to see Reilly’s former on-screen love interest, Sharon Wyatt (ex-Tiffany Hill Donely), reportedly the actress, who resides in Tennessee, was unable to participate in the episode. In a 2011 feature by “Inside Edition,” it was revealed the actress had half of her jaw bone removed after an operation relating to osteonecrosis.

So, with McCullough on board and several vets already revealed, who do you think could be the top secret surprise guest appearing on the special tribute episode? Either way, you’ll just have to tune in to find out!