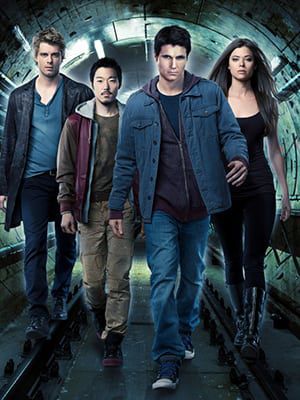 TVGN Announces Marathons of The CW’s Hit Dramas ‘The Tomorrow People,’ ‘The Originals’ and ‘Reign’

CBS will remain in business with Chuck Lorre after ordering second seasons for comedies “United States of Al” and “B Positive.” Sadly, there will be no season three for courthouse drama “All Rise.”

Debuting in early April, “United States of Al” airs Thursday nights after another Lorre fronted comedy, “Young Sheldon,” and tells the story of the friendship between Riley (Parker Young), a Marine combat veteran struggling to readjust to civilian life in Ohio, and Awalmir (aka: “Al”; Adhir Kalyan), the interpreter who served with his unit in Afghanistan and has just arrived to start a new life in America. “The Young and the Restless” alum Kelli Goss (ex-Courtney Sloane) plays Vanessa, Riley’s ex-wife. The series also stars Elizabeth Alderfer as Lizzie, Riley’s sister; Dean Norris as Art, Riley’s father; and Farrah Mackenzie as Hazel, Riley and Vanessa’s daughter. The first season finale has not yet been scheduled as the show will continue to air during the summer due to the show’s late start.

“B Positive” revolves around Drew (Thomas Middleditch), a therapist and newly divorced dad who is faced with finding a kidney donor when he runs into Gina (Annaleigh Ashford), a rough-around-the-edges woman from his past who volunteers her own. Together, they form an unlikely and life-affirming friendship, as they begin a journey that will forever impact both of their lives. Kether Donohue stars as Gabby, Gina’s best friend; Sara Rue stars as Julia, Drew’s ex-wife; Izzy G. stars as Maddie, Drew and Julia’s teenage daughter and Terrence Terrell stars as Eli, a new friend of Drew’s who is also going through dialysis. The first season finale aired on Thursday, May 13.

“All Rise” followed the chaotic, hopeful and sometimes absurd lives of courthouse judges, prosecutors and public defenders, as they work with bailiffs, clerks and cops to get justice for the people of Los Angeles amidst a flawed legal process. Among them is newly appointed Judge Lola Carmichael (Simone Missick), a highly regarded and impressive deputy district attorney who doesn’t intend to sit back on the bench in her new role, but instead leans in, immediately pushing the boundaries and challenging the expectations of what a judge can be. Soap alums Wilson Bethel (ex-Ryder Callahan, “The Young and the Restless”) and Marg Helgenberger (ex-Siobhan Ryan Novak, “Ryan’s Hope”) co-starred. The now series finale will air on Monday, May 24.

CBS will announce its 2021-2022 fall schedule during a virtual presentation to advertisers on Wednesday, May 19, which will include a full list of its renewed and canceled series.