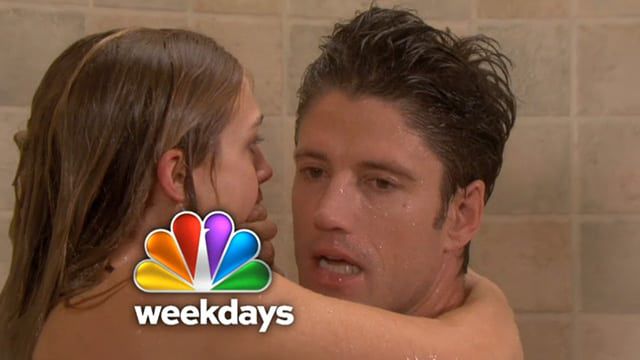 In the digital series “Chad and Abby in Paris,” “Days of our Lives” fans were introduced to actor Remington Hoffman who played Li Shin, the son of DiMera Enterprises board member Mr. Shin (Michael Hagiwara). Beginning Wednesday, April 22, look for the youngest Shin to head to Salem in a recurring capacity as he comes face-to-face with Gabi Hernandez (Camila Banus) as she lobbies for the CEO position at DiMera.

“I was surprised to work with someone new right away, but I was also happy because I felt like that shows the character’s story expanding,” said Hoffman of his appearance on “DAYS” compared to his time in “Paris” in an interview with Soap Opera Digest, on newsstands now. “As soon as I read Gabi was on the script, I thought, ‘Oh, there’s a new character and hopefully there can be some kind of relationship there.’ The whole first day that I shot was pretty much with Camila. It was really cool working with her because she’s really free. She’s really unexpected, and that’s the best thing to be around. She has a lot of energy and she’s really focused.”

In a promo for this week’s episodes, Li Shin is presumed to be the one behind the chair as Gabi says the words “Stefan” in reference to her dead husband who is either not really dead or someone who looks a lot like him considering his portrayer Brandon Barash is returning to the show this week (Thursday, April 23) as well.

“I had such a good time and a good experience the first time we shot that I was just looking forward to going back and I was hoping to work with the same actors again and meet new actors,” said Hoffman. “I wanted to be able to really just soak it in more and understand more of what’s going on.”

In addition to his time on “Chad and Abby in Paris,” Hoffman has appeared in episodes of “Station 19,” “Marvel’s Agents of S.H.I.E.L.D.,” “Westworld” and “Animal Kingdom,” among others.

In 2019, Hoffman took part in the Los Angeles portion of ABC’s Talent Showcase which selects actors to participate in casting project work alongside veteran directors for an intensive, two-to three-week rehearsal process that spotlights the actors performing one-act vignettes for invited casting directors, talent agents, managers, and other industry professionals.