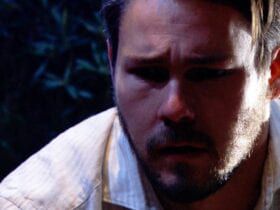 (SoapOperaNetwork.com) — If you happened to be watching the east coast feed of “One Life to Live” today, you may have felt you were in a time warp and it was Wednesday, August 24, 2011 all over again after nearly thirty minutes into the broadcast. Turns out you weren’t in a different dimension or anything more soapy, but you were witnessing a “technical glitch,” an ABC rep confirms to Soap Opera Network.

Today’s east coast glitch, which found a segment that originally aired during the soaps August 24 broadcast taking the place of another previously scheduled segment, had been rectified in time for the mountain and pacific time zone broadcasts (central time zone feeds off of the east coast feed directly) and the original episode will air as it was originally intended on SOAPnet and ABC.com.

This marks yet another occasion where the east coast feed of the soap had been interrupted this week alone. On Tuesday, August 23, an earthquake rocked the east just before the program began and caused local news to interrupt that days broadcast for all or part of the show. The episode aired in its entirety later that evening on SOAPnet and upon availability on ABC.com.