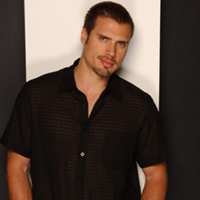 Ripping up the letter she had written, Sharon decided that she should just leave the farm for good. While walking out of the room, Sam woke up and moments later, was at the barn. He watched her pack and questioned where she was going. Sharon disappointed him when she told him that their having sex was a big mistake. He had promised to take things slow, just as long as she didn't leave. Sharon told Sam that people that became close to her only got hurt because of her and she couldn't let that happen with him.

Noah was going through some of the memory cards when Abby approached him. She questioned what he was up to and he said he wanted to do what he could to clear his mother's name but questioned if it would be for nothing. Noah declined Abby's offer to help and he turned the conversation to that of her leaving rehab: had she seen her parents. She admitted she was dodging them but he pointed out they would find out sooner or later. The two started to listen to one of his songs on his iPod and she liked what heard. She mused if Eden was the insipration. She soon revealed that while in rehab, she saw Eden there. Noah questioned if the two talked.

At Newman Enterprises, Victor welcomed both Victoria and Lauren to the board. Lauren voiced concern about her being there since she was the recent face of Jabot but Victor shooed them all away, telling her he wanted her there. Adam sauntered into the room and he and Victor stared icily at each other. When Michael brought the meeting to order, both Victoria and Adam agreed to nominate Victor as chairman of the board. It was the only agreement, however, between father and son. Victor proposed a deal with a Chinese petroleum company but Adam quickly shot it down getting some of the board on his side to look for a less risky option. Victor was displeased and during a recess in the meeting, he asked Michael about their case against Adam, but Michael said they didn't have a strong enough case.

Billy headed to Restless Style to give Nick the keys. The discussed payment arrangements when Phyllis walked in. Billy was furious to learn that Nick hired Phyllis back, despite what she did to his sister. Nick snapped that what he did with Restless Style and who he hires was no business of his anymore. After Billy left, Phyllis took her normal pleasure in badmouthing Billy but Nick stuck up for him that Billy was having a tough time since having Lucy taken from him and Victoria. Phyllis offered to leave if working together was going to be difficult.

After the meeting had ended Lauren and Michael headed out, leaving Victoria, Victor and Adam there. Victoria and Adam had a few snarky words, where she learned on Billy selling Restless Style back to Nick. She headed out to go talk to Billy, leaving Adamd Victor alone. Adam told Victor that he was losing his touch, but Victor said he was messing with the wrong man and it would cost him.

Eden found herself at Crimson Lights and was disappointed that Kevin wasn't there. As she looked around, she spotted Noah and Abby talking to one another. As she was staring at them, Lauren arrived and was shocked to see her. Lauren said that Michael and Kevin would be surprised to see her. She stepped out to retrieve her cell phone. While she was gone, Eden stepped out onto the patio and picked up Noah's earbuds and listened to his song, unaware that he stepped back inside to get his things. The two came face-to-face and soon were met by Abby, who was surprised Eden came to Genoa City after all.

Victoria headed over to Restless Style and ripped into Nick for taking the only company Billy cared about away from him, let alone hiring Phyllis back. Nick said that Billy was well aware of what he was doing when he sold the company back to him. He soon pointed out that Victoria disappointed him by going back to Newman Enterprises even after all that Victor had done to the two of them. When she left, Phyllis pointed out that Victoria would be a great person to use to get the dirt on Adam; Nick agreed.

A frustrated Billy continued to go down the drunken path by having a drink. He slowly removed his ring and tossed it into his glass of scotch. Picking up the phone he called his bookie to make another horse bet, but was interrupted by a visit from someone there to collect on his lost bets. The man refused to take a check, wanting cash instead. As they were talking, Victoria arrived. Quickly getting rid of the guy, he slipped him his watch. Victoria rrequested that they talk to one another after he was showered and clean. When he came back out, clean, she wanted to know why he sold his company, telling him that was the one thing he loved. Billy shot back that she no longer need to worry about what he does. She agreed but let him know that he has an impending custody case to keep Delia and in order to keep custody of her, he needed employment.