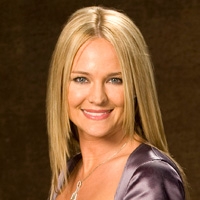 After a night of sex with Sam, Sharon woke up in his bed and started to recall the things in her past. She sat down at his table and started to write a letter about who she was. Sharon started off first by sharing the beginnings of her romance with Nick when they were in highschool but how her wanting to end things with her current boyfriend, Matt, turned ugly when he raped her.

She continued on with how Nick was always there to protect her, but was later crushed when he learned that she had a baby by someone else. The two hit a rough patch but soon came back to one another when Nick proposed. She soon recalled when she had to break the news to Nick about her rape by Matt, which in the end placed him behind bars when he was falsely accused of the man's murder..

Back in Genoa City, Nick was staring at an issue of Restless Style focused on Sharon's damsel in distress and her continued bond with Adam. He too started to have flashbacks of their time together and stared into a photo album of the two of them. His eyes came across a picture of Sharon and Cassie. After discovering his daughter's pendant, a saddened Nick starred at the magazine again, throwing it across the room. Noah, who came up to the office to visit his father, saw what happened and hugged him, admitting that he missed his mother too.

In Sam's room, Sharon continued to write down everything about her pass; recalling when Nick and Sharon got married, despite the strong reservations that Nikki had about their beign together. She soon shared of when Cassie, the daughter she gave up for adoption, finally became apart of ther family, and then the birth of Noah. She shared how happy they all were, until tragedy struck and Cassie had died due to a car accident, slowly ripping her and Nick from one another.

As Sharon wrote about Nick's constant pull from her, she recalled in a flashback of his affair with Phyllis and how she forced him into a confession by donning the same teddy she wore when they'd meet in a hotel suit. She soon wrote how he moved on with Phyllis and she with Jack, but soon found herself drawn to someone new: Nick's brother Adam. She shared how the two just clicked and bonded; him being the one person that could accept her for who she was, and he for who he was. She soon recalled the day he told her of his involvement in Ashley losing her baby and how he stole her baby to give to pass off as Ashley. Despite it all, she still fell in love with him.

Sharon's flashback soon took her to how those who didn't like Adam worked to destroy their relationship, causing Adam to be framed for the murder of Skye and soon, her arrest when Skye actually died in Hawaii when falling into the volcano. She commented that while they had succeeded in pulling them apart, Adam was the one that stood by her and didn't give up on her, ready to prove her innocent, even helping her to escape, which eventually led her to him.

Meanwhile, at the Athletic Club, Adam continued to look through the memory cards that Phyllis had retrieved. While looking at one, he saw footage of Sharon in his hotel suite seducing him playfully. He bemoaned how nothing was the same without her in his life and then picked up her engagement ring, tears rolling down his eyes.