Home / Interviews / Melody Thomas Scott: In Her Own Words 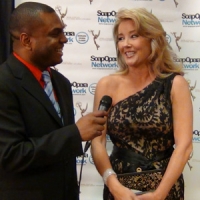 (SoapOperaNetwork.com) — Talk of being fired from CBS' "The Young and the Restless" and rumors of her making more money than Eric Braeden has created quite the controversy for Melody Thomas Scott, so the actress spoke with Soap Opera Network to set the record straight!

Backstage during the "38th Annual Daytime Emmy Awards," Scott, wearing a Tadashi Shoji dress and jewelry by Mark Lash, dished on her new book, shared her congrats to husband Ed Scott and his team at "The Bold and the Beautiful" on their big wins for the third consecutive year, and how "Y&R" has shown her disrespect after portraying the role of Nikki Newman for 32 years.

What are your thoughts on Scott's perspective?