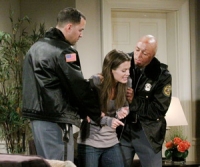 (SoapOperaNetwork.com) — On the week of July 25, look for Jennifer Bassey, Kate Collins and Melissa Claire Egan to reprise their naughty chick roles on “All My Children.” According to TV Guide’s Michael Logan, the sanity-challenged Marian, Janet and Annie will help break Dixie (Cady McClain) out of Oak Haven – Pine Valley’s long-standing psychiatric facility. Great humor will give way to great warmth when all of the aforementioned escapees are reunited with their loved ones.

Bassey played Marian Colby on “All My Children” from 1983 to 1985. In 1995, she returned to the soap for a long-running recurring stint in the role of one of Pine Valley’s best troublemakers. She was upped to contract in 1998. In 2003, Bassey was taken off contract but remained on the show on recurring status until she last aired in August 2009. The talented actress earned a Daytime Emmy nomination in the Supporting Actress category in 1999. Following her husband Stuart Chandler’s (David Canary) murder in 2009, Marian flipped her lid in a packed courtroom corridor and ended up shooting Marissa Chandler (then played by Brittany Allen) while targeting Kendall Hart Slater (Alicia Minshew). Marian is the mother of Liza Colby (Jamie Luner), in the 1980s Marian infamously took her daughter’s boyfriend Tad Martin (Michael E. Knight) to bed, and the step-mother of Scott Chandler (Daniel Cosgrove).

Collins played anti-heroine Natalie Marlowe on “All My Children” from 1985 to 1992. In 1991, Collins debuted in the role of Janet Green, Natalie’s bitter sister. Natalie was killed off in the summer of 1993 after an unsuccessful run by actress Melody Anderson. Soap veteran Robin Mattson took Natalie’s mentally ill sister on the road to sanity when she took over the role of Janet in 1994 to much acclaim. Mattson remained in the role until 2000. Collins returned to the ABC soap for stints as Janet from November 2005 to March 2006, from February 2007 to December 2007 and for a short run in early 2010. In the hands of Collins, Janet has always been “from another Planet.” Amanda Dillon Martin (Chrishell Stause) is the product of Trevor Dillon (James Kiberd) and Janet’s bedroom romp while Ms. Green was impersonating her otherwise holed-up sister, Natalie. Janet’s murder victims include Dixie’s brother, Will Cortlandt, and Amanda’s father. During one of Janet’s returns following the death of Dixie in early 2007, Pine Valley’s favorite loon hinted that Dixie was alive. Will the dots be connected this July? Stay Tuned.

Two-time Daytime Emmy nominee Egan debuted in the role of Annie Novak in July 2006. Annie started out as a good girl but took a dark turn with the arrival of her sociopath brother Richie Novak (Billy Miller) and the return of “the real” Greenlee (Rebecca Budig). Both arrivals threatened her marriage to white-knight Ryan Lavery (Cameron Mathison). In 2008, Head-Writer Charles Pratt Jr. saved Egan from what appeared to be building to an immediate early exit by embracing Annie’s brewing insanity. Annie’s lukewarm reception turned hot as Egan, too, embraced her now sanity-challenged character. Annie went on to marry Adam Chandler (David Canary) and Scott Chandler (then played by Adam Mayfield). Both marriages were destroyed due to Annie’s inability to stay away from Dixie’s son, JR Chandler (Jacob Young). Never far from mentally unstable, Annie completely lost her mind again in March 2011 in part due to JR’s shenanigans. Emma Lavery is Annie’s daughter with Ryan. Annie’s murder victims include her own brother Richie and Dixie’s half-sister, Di Henry.

Speaking of the woman that sends these three lovely ladies out on the lamb, Dixie Cooney Martin – look for the next substantial development in her return story to take place on July 1. It has not been revealed whether Bassey, Collins and Egan are slated to return for a limited amount of episodes, like Josh Duhamel and Eva LaRue, or for an extended run, like McClain and Thorsten Kaye. “All My Children” concludes taping on Friday, September 2 and last airs on the first day of Fall 2011, Friday, September 23.

Update (6/15/11 at 4: 15 PM EST): Earlier today, the Administrator of Melissa Claire Egan’s official website clarified the length of her return trip to Pine Valley. Egan is slated to return for three episodes.