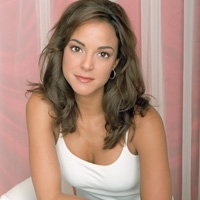 (SoapOperaNetwork.com) — Another name has been added to the growing list of former “All My Children” stars who have returned or are confirmed to be returning to bid the ABC soap adieu before taping concludes on September 2. So far, that list includes Josh Duhamel, Cady McClain, Thorsten Kaye and Shannon Kane. This evening, in a press release, ABC reveals that “CSI: Miami” star Eva LaRue will join that returning group. The 44-year-old stunner is due to bring Dr. Maria Santos Grey back to Pine Valley this July.

LaRue starred on the ABC soap from March 1993 to August 1997 and from June 2002 to June 2005. Her electric chemistry with co-star John Callahan, who played her husband Edmund Grey, translated into a real-life romance. The couple made their union official with a 1996 wedding. In 2001, the relationship produced a daughter, Kaya. LaRue and Callahan divorced in 2004. The actress married Joe Cappuccio in 2010. LaRue’s first husband was “Seinfeld” and “Dancing with the Stars” star John O’Hurley. LaRue is best friends with Sarah Michelle Gellar, who played Kendall Hart on “All My Children” from 1993 to 1995. As previously reported, Gellar has also expressed interest in doing a cameo appearance.

Before landing “All My Children,” the Daytime Emmy nominated actress guest-starred on numerous series including FOX’s “Married… with Children.” In between stints at the soap, she appeared on multi-episode arcs of the NBC drama “Third Watch” and the ABC comedy “George Lopez.” After her last exit from “All My Children” in 2005, LaRue landed a series regular role on the popular CBS procedural drama “CSI: Miami” as Detective Natalia Boa Vista. The actress who remains a fan of the ABC soap that put her on the map also returned for an appearance on its 40th Anniversary episode in 2010. LaRue has taken home two ALMA Awards and one Gracie Allen Award during her career.

A spokesperson for the talented actress tells Soap Opera Network that, as of now, the actress is signed on for two episodes. LaRue is slated to tape those episodes next week. Dr. Santos first episode back airs on Tuesday, July 19. Update on 6/13/11: Over the weekend, La Rue expanded to Entertainment Tonight that after completing filming of the two episodes this week – these initial episodes will be related to Dr. David Hayward played by Vincent Irizarry – she’ll return “during the course of the summer” to tape three more episodes. “CSI: Miami” will resume taping for the Fall season around that time but the schedules are not expected to conflict.