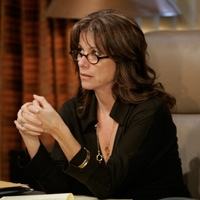 Despite events, everyone wants to celebrate after graduation, but Michael is nowhere to be found. Alexis tries to make a lesson out of Michael’s behavior, but Carly defends her son. Sonny threatens Mayor Floyd for Michael’s diploma. Michael and Jason have a heart to heart, and he agrees to work legitimately over the summer as a longshoreman at the coffee warehouse. Kristina hopes for a kiss, Michael and Jason join the party, and Dante breaks the news that his parole is over.

Brenda and Diane argue over the idea of Sonny legally adopting Alec.

Jason and Sam discuss if they would ever be able to let their children go.