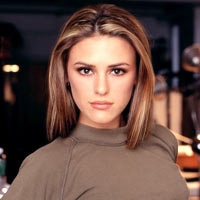 As Michael, Gloria and Katherine are talking about trying to find Kevin, Kevin and Chloe find themselves staring at homicide charges against them in the death of Jana. Chloe tells the police officer that Kevin was not a part of kidnapping Delia and Lucy. The police officer isn't interested in what they have to say, but rather interested in why the two of them are the only ones able to collaborate each other's stories. He tells them that until otherwise, he's looking at his two prime suspects.

Ashley and Tucker are having a night out at Gloworm, both discussing the troubles of Billy and Victoria when Abby and her group of friends enter rather loudly. Abby, who is already buzzed passes over her credit card to Jeffrey, cheering that they party has to get started. Ashley and Tucker look on in disgust.

Nick arrives at Sharon's home and lets himself in. When he enters, he sees Adam eating Chinese food by the fireplace. Nick demands that he leave immediately or be tossed out. Relishing in the fact that Nick hasn't heard the latest, gladly shares the news that Sharon willed him the house. Big brother isn't buying it, but Adam tells him that the only one that is leaving the house is him. Nick tries to offer Adam money, but Adam doesn't take the bait. He tells Nick that he enjoys being able to stick it to Victor every time he drives on his property to get to his.

Sam offers to give Sharon a job at his home. Although it is a nice gesture, she tells him that she doesn't think so. He asks her if there is a reason; Sharon is hesitant to answer. The two are talking when Sam hears his good friend, Marco calling out to him. Sam tells Sharon that Marco is a buddy of his who is a police officer in the next county. When she gets a glimpse of him, she realizes he's the one that pulled her over when she was on the run.

At the abandoned pre-school, the officer has a hard time believing that Chloe would come alone to help Kevin if she claims that Jana was crazy. When the medical examiner comes over, she says there's no definite determination of death. Kevin realizes that Jana could have had a seizure as she did before. The medical examiner tells them that they won't know the true cause of death until they do an autopsy. The officer has Kevin cuffed, saying he's going in for the outstanding warrant for his arrest in kidnapping Delia and Lucy.

Adam and Nicholas continue to go at it over Sharon. When Adam suggest that he buy Nick out, Nick scoff that he's not going anywhere. Adam tells him about his selling of his stock options and rubs it in his face again that Sharon gave him the house to live in. As he demands for the key that Nick has, Nick spots the news article on Adam's computer about Sharon's death being ruled a suicide. He tells Adam that D.A. Walsh was told not to disclose that as the reason for her being dead. Adam says they need to counteract to clear her reputation. Nick lashes out telling his brother that none of it would have happened if he hadn't entered Sharon's life.

Kevin and Chloe are hauled into the police station. Michael, Gloria and Katherine are happy to see him, until they see him in handcuffs. Michael hurries and whisks Kevin into the interrogation room and has him tell him step by step what happened. Meanwhile, Chloe, who can't keep her mouth shut, spills all to Gloria and Katherine, unaware that D.A. Walsh has overheard a majority of her conversation. He quickly pounces on her, coming up with his own theories on what happened between she and Jana. Before he could get her to talk, Michael shows up and tells him that unless he has solid proof, he's taking both of his clients home.

Abby continues her antics at Gloworm, her friends encouraging her embarrassing behavior. When the youngest Abbott pulls a total stranger toward her, giving him a kiss, Tucker and Ashley intervene. Pulling her to the side, they tell her about Billy and Victoria. Abby is upset to hear the news and even more upset that she can't call Daniel to comfort him. Ashley offers to take her home and when Tucker is ready to get the car, Abby becomes rude to him, telling him that she doesn't need his step-daddy routine. She soon starts to throw his one night stand with Diane in his face, which angers Tucker. He calls her the worst kind of brat and when he spots that Kent is holding a cell phone capturing everything, he snatches from his hands and stomps on it. Unable to be in the same room with her, Ashley and Tucker leave; meanwhile Abby continues to drink it up.

Sharon quickly dons a baseball came and comes out to meet Marco. Quickly mumbling a hello, Sharon tells Sam that she's going to the house to get more blankets. When Sam comments on Sharon's skittish behavior, Marco quickly asks if he'd like for him to do a background check on her. Sam tells him that there's no need to do that, she's fine. Marco leaves and Sharon soon returns. Sam comments that sooner or later, Sharon's going to open up to him on why she's running. When he leaves, Sharon starts reading the comments about her based on the article about her suicide. She's crushed.

Kevin thanks Katherine for not giving up on him. She tells Kevin that she never lost faith and hope for him and that she's glad that he's home. Giving him a hug she ascends upstairs to her room, while Chloe and Delia come out with cupcakes to cheer him up. Kissing Kevin, Chloe tells him that they will get through this together.