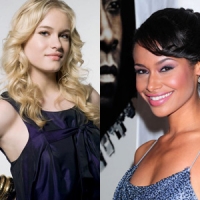 (SoapOperaNetwork.com) — The talented Shannon Kane played Natalia Fowler on “All My Children” from October 2008 to February 2011, and recently returned for a week long visit in late March. Socialite in training turned actress Leven Rambin played the sweet autistic Lily Montgomery from June 2004 to June 2008 and the dual role of the much more jaded Ava Benton on the same soap from from March 2007 to February 2008. In the last week, Kane has debuted in her second featured role in a motion picture; while Rambin has been cast in the first installment of one of the most anticipated film adaptations of a book series in years.

On Friday, April 22, Shannon Kane hit theaters everywhere in Tyler Perry’s “Madea’s Big Happy Family: The Movie.” In the movie, Kane plays one of the three troubled children of Madea’s (Tyler Perry) even more troubled niece Shirley, played by the divine Loretta Devine. Kimberly, Kane’s character, is too consumed by her anger to see that her mother needs her. Perry’s latest film-adaptation of a theatrical production played slightly below the $30 million expectations, earning $25.8 million on it’s first weekend in theaters across the country. It was edged out for the number one spot by the animated family film “Rio” which earned $26.8 million on its second weekend of release. Previously in film, Kane portrayed the main love-interest of Richard Gere in “Brooklyn’s Finest,” a hooker named Chantel.

“The Hunger Games,” originally published by Scholastic in September 2008, is an award-winning, top-selling (over 3 million copies sold in America alone) young-adult science fiction novel series written by Suzanne Collins. “The Hunger Games” takes place in post-apocalyptic world where The government of Panem – the area previously known as North America – known as the Capitol holds absolute power. Following a failed rebellion against the Capitol, each year one boy and one girl between the age of 12 to 18 from each of twelve poorer district in Panem are chosen to fight to the death to demonstrate the reach of the Capitol’s power. The lead characters in the novel are District 12’s Katniss and Peeta. 20-year old Jennifer Lawrence, a Best Actress Academy Award nominee for “Winter’s Bone,” and 18-year old Josh Hutcherson landed the coveted lead roles. 20-year old Rambin will co-star with Jack Quaid, son of Dennis Quaid and Meg Ryan, as District 1’s ruthless career tributes Glimmer and Marvel. Although she has guest-starred in numerous prime-time shows, this is Rambin’s first trip to the big-screen. The Lionsgate Entertainment film which begins filming in late Spring is slated for release in theaters on March 23, 2012. Lionsgate expects the film adaptations of Collins series of “Hunger Games” books to rival that of Stephanie Meyer’s “Twilight” adaptations.

Kane and Rambin are not the only recently departed “AMC” stars making a splash on the big-screen. As Soap Opera Network previously reported Colin Egglesfield will appear in theaters across the country beginning on May 6 in the film adaptation of the book “Something Borrowed.” He leads the cast with Kate Hudson, Ginnifer Goodwin and John Krasinski.