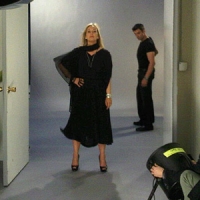 In a rarity for soaps, CBS posted on its Twitter page today your first look at Genie Francis in her newly created role of Genevieve, who looks to be the next villainess on the networks "The Young and the Restless." The image was first posted on on-screen son Daniel Goddard's (Ethan 'Cane' Ashby) Facebook page. From looking at the image (posted at right), the actress' new character is surely nothing like her iconic character, Laura Spencer, from her time on "General Hospital, which is what she wanted when she spoke with Oprah Winfrey in February. "If there is a way to go forward with Laura and make her into what I’d like her to be now, then perhaps I would do it," said Francis. "I would like her to be funny and have a little bit of an agenda that might look a little bit vengeful, but it really isn’t. I think she’d have a plan," she continued. "There is nothing in me that is willing to play a victim anymore. I’m sort of done with the wounded dove in my life."

While an exact first airdate has not been set, Francis is expected to make her debut on "Y&R" towards the end of May. Meanwhile, Goddard fans can breathe a sigh of relief as Soap Opera Network is hearing that Christel Khalil's Lily, Cane's widow, will come face to face with her "dead" husband in early May and the two will share a kiss!