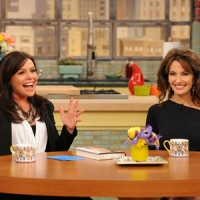 On Monday, March 28, Susan Lucci visited ABC's "Good Morning America" and spoke with co-host Robin Roberts to discuss her new autobiography, "All My Life," which was released on Tuesday, March 29. In addition to her appearance on "GMA," ABC's "Nightline" aired a taped segment with the actress that same night where Lucci was followed in and around her Long Island home by ABC News correspondent Juju Chang. On the day of her books release, Lucci found time to chat with Lisa Rinna and Regis Philbin on "Live with Regis & Kelly" (Kelly Ripa had the day off), but her appearance on "The Rachael Ray Show" looks to be where Lucci had the most fun. The taped segment, which airs Friday, April 1, finds Lucci slapping two of Rachael Ray's staff members (a third was left to Ray herself), addressing those "All My Children" cancellation rumors and the actresses personal story on the legendary Elizabeth Taylor, who passed last week due to congestive heart failure.

It has been nearly two weeks since rumors began to circulate that ABC might consider canceling "All My Children" in favor of a new talk show or another cost-effective program. According to Lucci, however, "that is a rumor. It's a rumor that is not coming from ABC. We have, I have just been given my schedule for next year. So, that's what I know!" Lucci said, referring to her work schedule with the soap based on her character's future storylines.

Meanwhile, with Friday being April Fool's Day, Lucci was asked to share a fond April Fool's like memory. "It was Carol Burnett who was playing the part at 'All My Children' and Elizabeth Taylor, a good friend of Carol Burnett's, came as a surprise to Carol Burnett. She came in, sneaked in, put on like a scullery maid's uniform with a cap that would hide her," said Lucci of Taylor's surprise appearance in an episode of "AMC" that aired in 1984. "She just got down on her hands and knees and scrubbed, scrubbed the floor, right past Carol Burnett's feet. And Carol Burnett was trying to go along with it, it was not in rehearsal, and Carol Burnett's thinking 'oh they added this.' I didn't know this was happening! And then Elizabeth Taylor looked up, and you know, said surprise! So, I don't know if it was April Fool's Day, but it was a great prank."

Since her piece on "Nightline" aired on Monday, Lucci has been asked to showcase that famous Erica Kane slap. She did just that on "Rachael Ray." While in her Erica Kane persona, Lucci found herself slapping Tom, one of Ray's producers, after he ignored not one, not two, but three of Ray's telephone calls that morning. Steve, a Stage Manager on the talk show, is the guy who doesn't hold the elevator for someone knowing they were right there. Of course, Erica slapped that! It was Chad where Ray herself had to step in. Chad, who met his wife and had a baby while employed at the show, brought in his baby on a day that Ray wasn't in the studio. Knowing that she had purchased diapers for the kid for life, as Ray described it, Chad took away the hosts chance to share in on the joy of the newborn's life.

For a preview of tomorrow's episode, check out the videos below.