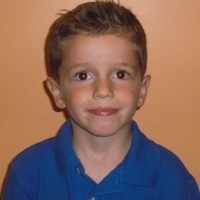 (SoapOperaNetwork.com) — He may have only recently taken over the role of Sam Manning, the son of reformed rapist Todd Manning (Trevor St. John) and the late, mentally disturbed Margaret Cochran (Tari Signor) on “One Life to Live,” but five-year-old Patrick Gibbons, Jr. is already making the most of his time in the spot light.  The kindergartner says in an interview that he becomes “very excited when [I] see myself on TV.  I love it.” However, Gibbons’ parents almost passed on the chance to audition for the long-running daytime drama, believing their son’s chances of landing the role were slim at best.

In an interview with M. English of the Montgomery News in Fort Washington, Pennsylvania, Gibbons’ father Patrick Sr. says that it was his son’s agent, Barry Kolker‘s idea to audition for the soap.  Reluctant at first, he finally relented, telling wife Maureen that “If you want to go up to New York and waste four hours, go ahead.”

Little did he know however, that his little boy was about to get his first big break into show business.  “He needed a head shot and a resume. So I took his picture with my cell phone and wrote down, ‘He likes to ride his bike, and he goes to school at St. Philip’s,’ he confesses.  “That was that. He went in [for the audition] with over 100 kids, got called back with nine other kids and ended up getting the part.”

Gibbons, who typically visits the “One Life to Live” studios three or four times a week to tape his scenes, is said to be “having a ball” working on the show.  But, despite their son’s sudden national exposure, the boy’s parents are determined not to let his new-found success go to their heads.  “[We have] no intention of pushing any of this Patrick loses interest.  Nothing lasts forever, especially in this business.  He’s only 5.  If he continues to like it, we’ll do what we can to support him in [pursuing] it.  If he doesn’t…well, again, he’s only 5,” Patrick Sr. tells the newspaper.

Five-year-old Patrick Jr.was discovered by accident.  The boy typically accompanies his parents on their trips to New York City with middle daughter Anna Marie, an “aspiring actress-model,” to meetings with her talent management team. That’s when Kolter spotted Gibbons in a waiting room and immediately thought he had natural talent.  However, his first audition, for the Broadway rendition of “Billy Elliott the Musical,” didn’t go so well.  As for Anna Marie, she has been cast in a non-speaking role in the upcoming comedic film “The Sitter,”  starring accomplished actor and producer Jonah Hill.

When he’s not at school or on the set, Gibbons leads a pretty normal life for a child star, ice skating, playing guitar, and spending time with friends.   But sometimes his life seems anything but normal.

Patrick Sr. recalls an incident where he encountered two of his son’s “One Life” co-stars, John-Paul Lavoisier (Rex) and Farah Fath (Gigi), at a poker tournament recently.  He said that Fath related a conversation she had had with the five-year-old a few weeks ago.  “While they were on the set, Patrick told her that he loves to ice skate.  She asked him how long he’d been skating, and he said 10 years.  A pretty good trick for somebody who’s 5, huh?”

Gibbons made his “One Life to Live” debut as Sam Manning back on December 22, taking over the role from twins Jacob and Luke Clodfelter (who first aired in 2007 and last aired in January of 2010).  The role was originated by yet another set of twins, Zack and Daniel Frisch in 2006.