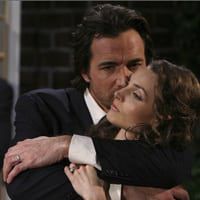 (SoapOperaNetwork.com) — That’s what friends are for.

Cole puts two and two together and frantically searches for Starr at the clinic. Markko and a still disguised Langston panic upon learning that Todd is headed for the diner to spend time with Starr. Meanwhile, Starr and Cole come to a decision about the baby. Starr narrowly manages to switch places with Langston before Todd arrives. Cole lies to John about needing money for football camp and asks Markko where he can get fake IDs for he and Starr. Starr nearly confesses the truth to Blair before being interrupted by Todd, who shocks her by allowing her to see Cole if she stays away from him for six months. Blair is pleased with the change in Todd. Langston tries to assure Starr that everything will work out. Cole’s letter brings Starr to tears. Cole shares his future plans with Starr.

Gigi stands up for herself when Adriana claims that she can’t stay away from her man. Gigi and Adriana pretend to get along in front of Rex. Jared asks Gigi out to Capricorn as a friend after seeing Natalie and Miles having a drink together. After getting intimate, Rex and Adriana also stop by the club. Back in Missouri, Dorian and Layla interview Brody’s sister Nadine, who shocks them with the news that their mother lied to Gigi about Brody getting killed overseas. Adriana’s head spins after learning that Brody is alive, and later her mood darkens when Rex leaves for BE. Clint receives information about Calvin Jenkin’s son from Rex. Gigi tells Rex that he should spend less time around her and Shane since Adriana does not like them. Shane draws a comic book villainess that closely resembles Adriana. Dorian and Layla track down Brody Lovett, and tell him that Gigi left town because she thought he was dead. However, they are stunned to discover that he knew she was pregnant at the time. Adriana bubbles as Rex believes she has no problem with his friendship with Gigi. Marcie hides her true feelings when Adriana asks her to watch the guest book at the wedding instead of being a bridesmaid. Gigi manages to cover her true feelings for Rex when warns Rex to stay out of her personal life.

Cristian tells Antonio that there is nothing going on between Sarah and Cristian. Llanview reacts when John and Talia appear to flaunt their relationship in front of Antonio at Carpricorn. Cristian snaps and punches John when he kisses Talia, and later gets arrested after accidentally punching Eddie. Adriana stews as Rex rushes to help Gigi, who is knocked down in the confrontation. Back at the station, Ramsey scolds and insults Talia. Antonio is assured by Ramsey that, while Cristian will have to spend the night in jail, that no charges will be pressed against him. Jessica informs Cristian that she’s there for him. While tending to his cuts and bruises, Blair tells John that he is a piece of work. Ramsey continues to tend to his bedridden guest. As John and Talia work to establish a connection between their boss and Caitlin, Ramsey informs Janet of just how much Caitlin meant to him. Ramsey shocks everyone, except Antonio, by announcing that no charges will be filed against Cristian. Jessica and Cristian continue to be bothered by Sarah and Nash’s closeness. Michael gives Antonio the devastating news that Jamie is seriously ill with a heredity disease that is costly to treat. Ramsey overhears Michael and Antonio’s conversation about Jamie.

– Bo believes he has managed to persuade Calvin Jenkins to stop his attack on BE.

– Dorian vows to destroy Calvin if he doesn’t follow through with her plan.

– Bo doesn’t agree with Clint’s business tactics, however he does understand why his brother is doing what he’s doing.

– Jared challenges Natalie to kiss him and prove that she feels nothing for him.

Monday: Cole tries to assure Starr that his plan will work; Gigi confesses her true feelings for Rex to Marcie; Natalie gives in to her feelings for Jared.

Tuesday: Bo agrees to fight dirty in order to protect BE; Antonio is temped by easy money; Starr and Cole put their plan in motion.

Wednesday: Starr and Cole’s future is uncertain; Antonio makes a surprising decision; Nash gets in deeper with his secret business partner.

Thursday: Adriana plots against Gigi; Todd and Blair discover what Starr is hiding; Calvin refuses to give in to Dorian’s demands.