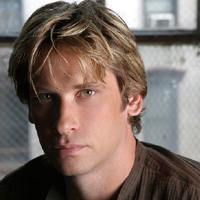 Luke and Noah go on a witch hunt when they begin searching for evidence to nail Elwood for the death of Reg on Thursday, February 19. When Kevin pushes some vital information about Elwood, they begin working harder to trap him. Matt continues to get closer to Alison, to the disappointment of Casey. Liberty and Parker take Johnny on a special Valentine’s Day trip when they read stories to him featuring some of Oakdale’s citizens.

The Inside Story: Ce la Vie
A defeated Paul facing kidnapping charges decides to plead guilty for his crime. As he waits for the verdict Dusty approaches Meg and stresses she should speak out against Paul to sway the judge’s decision in giving out a stiffer sentence. Unfortuately for Dusty, Meg feels that she doesn’t need to do that. To everyone’s chagrin Josie goes before the judge and gives him a reason to decide to suspend not only Paul’s sentence but give him supervised visitations to Eliza. Dusty fumes upon the news and shuns Josie when she goes over to the farm to explain why she did what she did. Barbara realizing that Josie could be the person to be there for her troubled son and asks Josie if she’s willing to do that. Josie later pays a visit to Paul and the moment becomes tense when he kisses her, which stuns her. At the farmhouse meantime, papers are delivered to Meg informing her that all of Paul’s assests belong to her. Dusty retrieves and hides the papers rather than inform Meg. He then heads to Fairwinds and spies a close moment between Paul and Josie. He soon jabs at Paul telling him that Meg no longer wants any part if him in her life. The minute Dusty departs Josie tells Paul that she believes it is time for her to leave Oakdale for good. After leaving Fairwinds, Josie goes to find Dusty, who isn’t all that thrilled to see her. She tells him that it is time for her to move on and that she hopes he finds true happiness.

A Closer Look: Back in Business
Still sore by Carly’s rejection of him, Craig goes to Lily’s and tells her that Carly never came up with the idea of Midnight Sun, but rather it was his concept. Lily becomes upset that she’s once again falling for Carly’s schemes but quickly remembers that Craig isn’t always on the level either and dismisses what he says. After talking to Carly, Lily meets up with Henry and they devise a plan on how to get the inspector to focus on making a deal with Carly only. Unfortunately their scheme falls apart when Craig catches wind of it. Carly reluctantly agrees to work with Craig but Lily says that if she ever needs her help, she’ll be there for her.