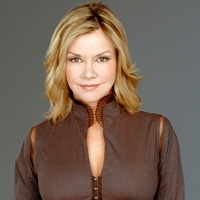 Bianca insists that Kendall doesn’t need to watch after her. In the park, Marissa encourages Bianca to let out her frustrations by throwing snowballs. Bianca does and takes out all her anger towards Reese. Bianca winds up in tears, afraid she’s going to lose her kids. Marissa admits to Caleb that while she has a strategy laid out she’s terrified she will lose Bianca’s custody case.

Griffin finds himself in a bit of danger after he tries to push past the bouncers to meet with the casino owners. He winds up with a few broken ribs and Cara expresses her worry. After telling Tad he has nothing to bring to the cops yet, Tad suggests they make it a team effort. Kendall’s also worried when she sees Griffin’s bruises and he covers that it was from a jealous ex of the date he went on last night. As the two shares a moment Ricky’s watching through the window. Ricky bumps into Kendall and again plants some seeds of doubt in her mind about Griffin, saying that the teens involved in the drug ring were beat up but managed to hurt the assailant. His description of the assailant sounds a lot like Griffin and Kendall’s alerted.

Krystal questions Jack on why he would take jabs at Caleb when he already has Erica. Krystal says that Jack’s love and happiness has given her hope. Alone, Caleb toasts the bride with a drink, then later tells Marissa he doesn’t want to run the company without Erica. While it would be easier to work with someone else instead of Erica, she makes him feel alive; Erica arrives and overhears. Kendall is thrilled over Erica’s wedding news and announces it to the whole office which leaves Erica a bit shy. Bianca overhears Erica and Opal discussing the kiss with Caleb; Erica dismisses it as no big deal. Opal doesn’t think he should be invited to the wedding but Erica says she will handle the guest list.