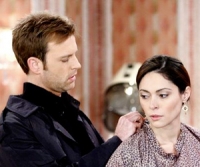 (SoapOperaNetwork.com) — A look at what's happening on "One Life to Live" during the week of February 28, 2011.

Tomas urges Téa to leave Todd. Blair learns of her mystery man's true identity, and gets an earful from Todd. James and Starr reach a new understanding. Starr tries to persuade Dani to go home on Thursday, March 3. Starr confides in Dani, and James in Nate. James pushes Nate to smooth things over with Todd. Todd demands Inez tell him what he wants to know. Later, Todd puts the fear of God into the teens just as Téa arrives. Téa issues Todd a stern warning.

The Inside Story: How You Doin' Llanview?
Rex tells a sympathetic Gigi what he knows about David on Tuesday, March 1. Bo, Nora, and Téa are horrified when Clint is deemed a free man. Vimal changes his story. Aubrey thinks she and Joey should consider making new living arrangements. Nigel receives the good news about Clint while watching Access Llanview on Wednesday, March 2. Bo and Nora talk to Matthew about his Uncle Clint. Bo is shocked by Rex's confession, and refuses his help. Nora has some words of encouragement for Bo. Dorian misses David. Cutter gives Dorian a shoulder lean on. And Gigi comforts Rex.

A Closer Look: She's Got Personalities
Brody and Langston are too little, too late on Monday, February 28. Brody finds an excuse to take Ford and Tess into custody. John gets sucker-punched by Joey. John and Kelly discuss their one night stand. Roxy is upset to find John and Kelly together, and urges John not to give up on Natalie. Echo is confronted by Dorian. Echo pays Viki a visit. On Wednesday, March 2, Brody and company arrive back in Llanview, where Viki, Clint, and Dr. Levin are waiting for them. Turning the tables on Jessica's loved ones, Tess delivers some surprising news. Tess works to reassure Ford on Friday, March 4. Ford tells Viki what Clint did to him. Tess tries to put one over on Roxy and Natalie, who begins to get suspicious of her sister's behavior. And Marty is pleased to learn that John and Natalie have broken-up.