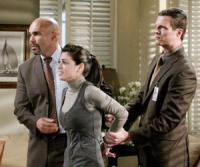 (SoapOperaNetwork.com) — A look at what’s happening on “All My Children” during the week of February 21, 2011.

Colby tries to digest her mother’s shocking admission on Wednesday, February 23. Erica decides to cut ties with Caleb to save her relationship with Jackson; will she follow through? Ryan updates Kendall on the latest news about the investigation into Zach’s accident on Thursday, February 24. Ricky tells Diane that he will do what it takes to find the evidence Slater left behind. Kendall makes a disturbing discovery as Ricky looks on. On Friday, February 25, will Madison accept Scott’s invitation?

The Inside Story: Federal Case
Amanda tells Tad what she did. Jake is shocked when Cara is accused of being a terrorist. On Monday, February 21, Cara explains everything to Jake who manages to convince the FBI agents that they’re wrong. Tad beats Jake to Cara’s rescue. Jake is discombobulated by news of Tad and Cara’s engagement. Tad tells Opal and a flustered Krystal that he is off the market. Griffin is grateful but wary as he issues his sister, Tad & Jake each specific warnings about their parts in this green card marriage. Amanda tries to explain her actions to an upset Jake on Thursday, February 24. Cara feels responsible for the tension between Jake & Amanda. Tad consoles his fiance.

A Closer Look: Tell Me Lies
JR’s words ring hollow to both Colby and Marissa. Marissa & David make a deal. David declares to Liza that he will soon be seen as something more than a villain. Ryan, Greenlee & Jesse confront David who denies knowing anything about Emma’s disappearance. Ryan busts in on David in the middle of a phone call to Annie. Greenlee challenges Marissa on her new-found faith in her father. On Tuesday, February 22, Ryan fills David in on what Annie did to Marissa before disappearing. David gives in to Marissa’s plea and tells the truth. Marissa walks away from David. Is JR helping Annie stay a step ahead? Ryan asks Marissa for help with JR. Ryan & Greenlee follow JR who arrives at a Montreal hotel on Friday, February 25. Emma gets a message to Madison who contacts the pair with news of Annie’s change of plans.